The adventure of a lifetime is easier and more comfortable than you might suspect. A bush drive on dirt and gravel roads feels a bit like a roller coaster ride. Here, a driver from Richard Branson’s Mahali Mzuri Kenya Safari Camp skillfully maneuvers his vehicle across a riverbed in the Motorogi Conservancy, just north of the Masai Mara National Reserve. 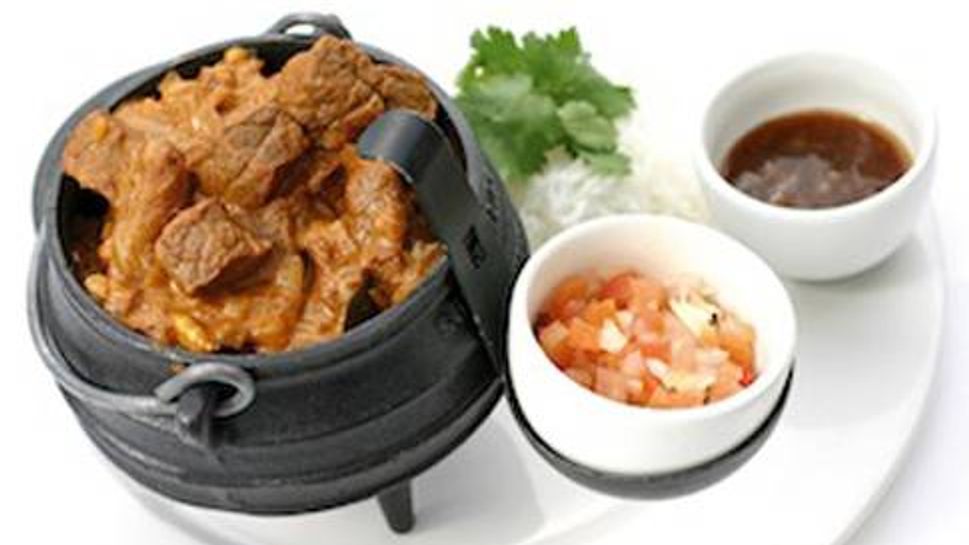 Made with carrots, onions, tomatoes and peppers and often served with rice, goat stew is one of the classic meat meals eaten in Kenya. Safari-goers generally have the opportunity to taste this and other local dishes at camps or in the bush. There is something magical about dining outdoors under Acacia trees just as the sun is about to set. This bush dinner was held at Four Seasons Safari Lodge Serengeti (Tanzania). 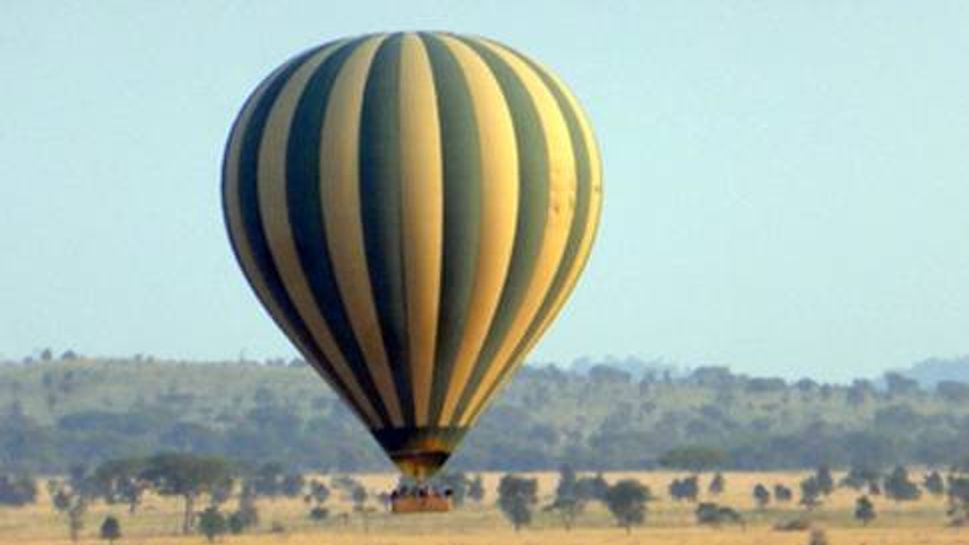 An exotic way to see wildlife and birds is by taking a hot-air balloon and floating over the fields and treetops of the Serengeti National Park (Tanzania). Although it is made of canvas and zips up at night, this luxurious tented suite at Mahali Mzuri Safari Camp (Kenya) has many of the amenities of a room in a five-star hotel, including an ensuite bathroom. 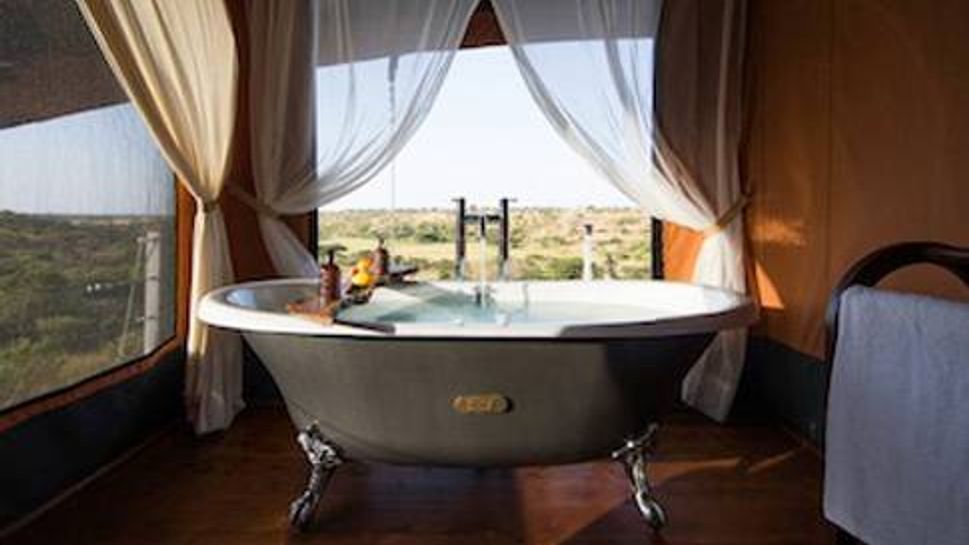 This clawfoot bathtub with views overlooking the valley offers guests a blend of relaxation and romance at Mahali Mzuri Safari Camp (Kenya). 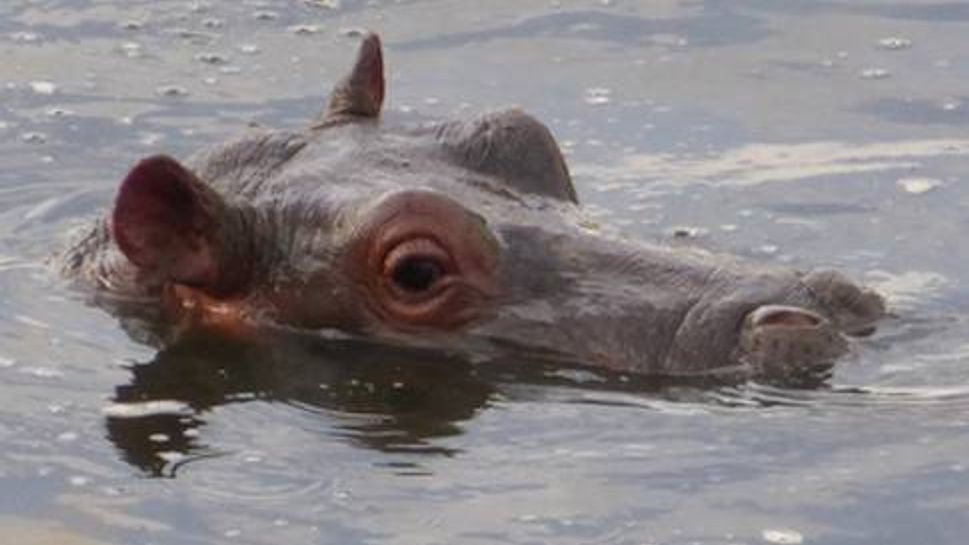 This hippopotamus in the Masai Mara National Reserve (Kenya) spends most of his time in the water, emerging to eat grass between dusk and dawn. Highly social animals, hippos travel in groups of 10 to 12. Leopards are hard to see in the bush. You’re likely to find them resting in a tree like this one in the Masai Mara National Reserve (Kenya). 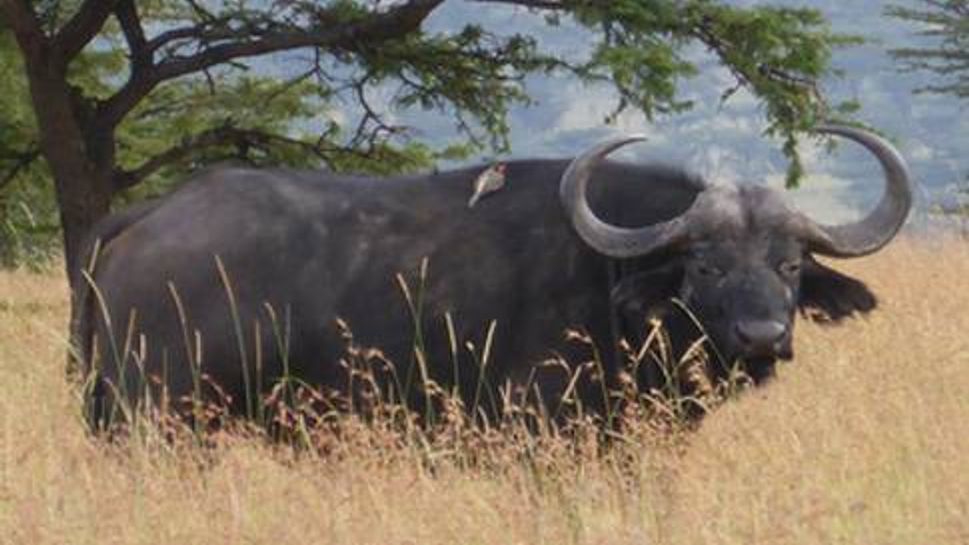 African buffalos, like this one spotted on the savanna near Olare Mara Kempinski (Kenya), are the most powerful and dangerous animals in Africa, killing more big game hunters than any other. These playful lion cubs are perfectly camouflaged in the grasses of the Masai Mara National Reserve (Kenya). Not far away, their mother is always looking over them. The Four Seasons Safari Lodge is located within the Serengeti National Park (Tanzania), so it’s not surprising to see animals roaming the grounds nearby. This baby baboon hopped on a balcony rail outside a guest room. The luxury tents at Richard Branson’s Mahali Mzuri Safari Camp (Tanzania) offer expansive views like this of various animal species grazing in the lush valley below the camp. 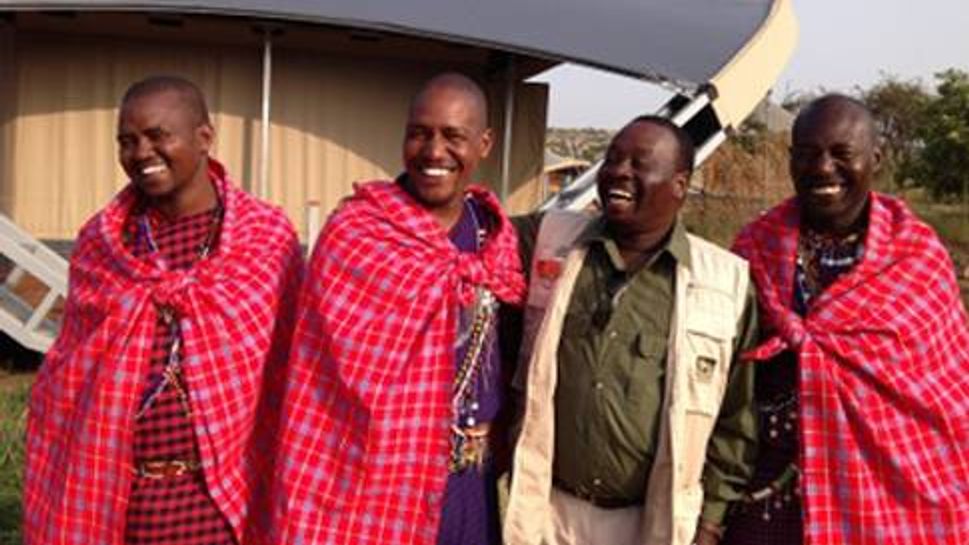 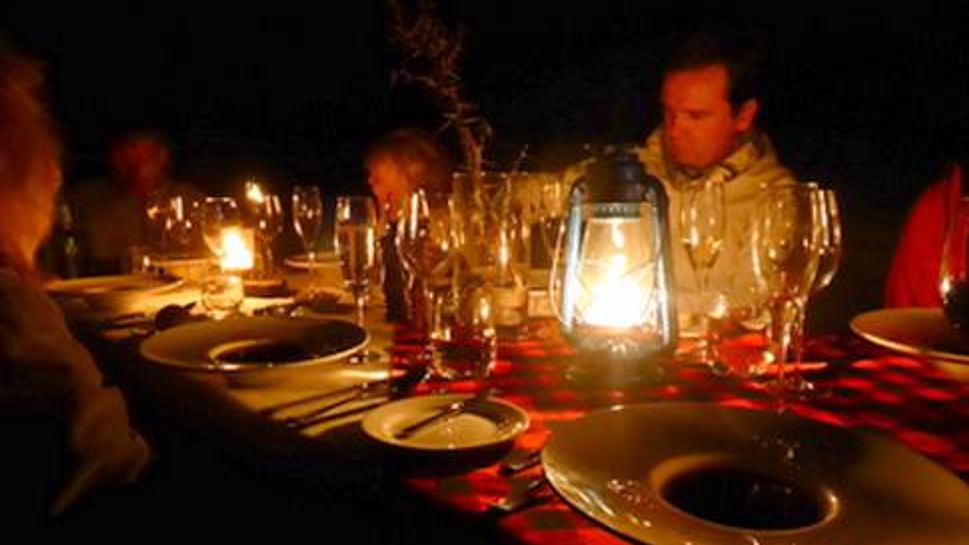 The precision timing and mouth-watering menus of a bush dinner are among the many wonderful surprises experienced by safari goers. This one, at Mahali Mzuri in the Motorogi Conservancy, offered a chance for camaraderie over gourmet dishes. Even at Serengeti National Park, a UNESCO World Heritage Site in Tanzania that’s home to 2.5 million mammals, it’s a surprise to see an elephant cross in front of your vehicle.

For many of us, our lifelong dream of an African safari gets delayed until our 40s, 50s or beyond, because of the time and expense involved. Ironically, when we’ve finally got the ways and means to take a safari, we may be hesitant because of age-related concerns.

With thoughtful planning, however, most midlife travelers can enjoy a memorable experience that more than satisfies their needs, interests and budgets. “As long as they know what to expect, no one is too old for a safari,” says Philip Rono, a gold-level guide at Micato Safaris who once guided an 87-year-old and her large extended family.

As a seasoned boomer traveler — and travel writer — I’ve heard all the common misperceptions that hold people back from their safari dream. Allow me to dispel them.

1. You’ll give up all creature comforts. You can — if you want. But these days, safari lodgings range from rustic to upscale and include everything from stays at family-owned lodges and ranches to “glamping” in high-end campsites and luxury private tented camps.

If you can afford it, you can sleep in a four-poster mahogany bed covered with fine linens and draped with mosquito netting. At Olare Mara Kempinski, one of five tented camps in the Masai Mara National Reserve, en suite bathrooms have hot running water, separate showers and romantic clawfoot tubs. On chilly evenings, you might find a hot water bottle tucked under your top sheet.

Although luxury “tents” have canvas sides and zippered doors, many feel more like suites at five-star hotels. At properties like these, the staff goes the extra mile to pamper guests. Delicious meals, including surprise dinners in the bush, showcase local dishes like ugali and goat stew while still catering to international palates.

2. You’ll be out of contact and disconnected. For better and worse, you can’t count on a safari for a rapid digital detox. “Just 10 or 15 years ago, we had to use radio relays to connect with our guests in the bush,” says Dennis Pinto, a managing director of Micato Safaris.

Today cell phones are ubiquitous across the continent. After sighting a kill or interesting animal, bush drivers often use their phones to spread the word. While roaming costs can still be exorbitant for foreigners, international texting — at about 50 cents a message — is a bargain. And most properties offer Wi-Fi, at least in common areas.

Worried about not speaking the language? Scratch that. As a consequence of what is sometimes jokingly called the “British hangover” from the colonization of Africa, English is spoken widely. In some countries, it’s the primary language. In East Africa, for example, most people speak English, Swahili and a native dialect.

3. You have to be a very fit and active traveler. Unless you’re planning to climb Mount Kilimanjaro in Tanzania (something one Micato traveler did it at age 60), safaris usually involve far less walking or strenuous activity than you might anticipate. The most challenging feats generally involve getting into and out of four-wheel-drive vehicles and small bush planes as you move from one game park to another.

Two caveats: A trip to Africa does entail long flights across multiple time zones, so you may suffer from jet lag upon your arrival or departure. And people with knee or back problems may need to exercise caution on bumpy terrain. One thing you won’t have to worry about is your luggage. On most tours, transfers of bags from the airport to your hotel or from one campsite to another will be handled seamlessly.

That said, more active and adventurous travelers can take advantage of exciting opportunities to see wildlife and birds during long bush walks, on horseback or from a hot-air balloon.

4. You’ll be attacked by a lion or bitten by a snake. When a herd of elephants or buffalo approaches or a pride of lions plays beside their vehicle, safari goers typically experience wild excitement tinged with a bit of nervousness. But the odds of being attacked by an animal are next to nil.

Property owners and tour guides take safety and security precautions extremely seriously. Most camps aren’t fenced in, but armed guards (called askaris) escort guests to and from their tents after sunset, or any time upon request. Similar to the standard safety drills in which passengers participate on cruise ships, instruction sessions by safari staff and guides teach tourists how to avoid unnecessary risks and what to do in an emergency.

The No. 1 reason tourists come to Africa is to see big game like elephants, lions, leopards, buffalo and rhinos, the type of animals ordinarily caged in zoos and separated by species. Yet travelers on safari are often amazed by how close they can get to wildlife.

At the Four Seasons Safari Lodge Serengeti in Tanzania, you could find yourself eye-to-eye with a baby baboon on the deck rail of your balcony. When you see zebras and antelopes eating together in the savannah, you can’t help but feel like part of the “Peaceable Kingdom.”

5. Animals can be hard to spot. It does take some adjusting for a virgin safari-goer to multitask in the bush: peer through binoculars, listen to the guide, spot animals amid camouflage and take photographs and copious notes while bouncing in a 4 by 4.

“Finding the animals was more of a challenge than I thought it would be,” acknowledges Amy Citrome of Wesley Hills, N.Y., a boomer who has gone on two safaris to Kenya and South Africa. “But part of the fun was the ‘hunt,’" she says.

Elephants and giraffes are the easiest game to spot because of their size, but sighting lions and leopards (and even hippos in a bathing pool) requires concentration, patience and good vision. Worried about missing a big one? This is why you need an experienced tour guide, whose knowledge of animal habitats and behavior is invaluable.

6. You’ll be a victim of crime or terrorism. With looming threats at home and abroad, it’s understandable that visitors worry. But since tourism is the lifeblood of Africa, both the government and private industry are diligent about protecting safari-goers and avoiding bad press. No destination, property or conveyance anywhere can guarantee total safety, so travelers need to be prudent about not venturing into unsafe areas and keep abreast of current travel warnings from the U.S. Department of State.

7. Safaris are unaffordable. Granted, a safari is not cheap. But there’s a wide range of prices. When doing your research, be sure to read the fine print and find out what is and is not included. Although the price of a luxury, all-inclusive safari may appear to be high, it often includes the costs of accommodations, puddle-jumpers and bush vehicles, meals, alcohol, guided tours and other amenities. Cost depends on the level of luxury you prefer, and there are trips to fit almost any budget.

Choosing the Right Safari for You

Africa is a vast continent, so one of the first steps is determining which area you want to visit. Each region is characterized by different wildlife, migration patterns, ecosystems and special attractions. Do your homework by reading guidebooks, checking out numerous websites and speaking with travel agents, tour operators and veteran travelers.

You also need to decide when to go, bearing in mind that prices are generally higher during prime American and European vacation periods and the annual wildebeest and zebra migration from July to October.

Once you have made those two decisions, you’ll need to settle on a specific itinerary and arrange the logistics of transportation, accommodations and tours. Again, the experience and expertise of a reputable tour operator will make all the difference in the world.

A final word of advice: Don’t put off this journey too much longer, because you will surely want to return.

Irene S. Levine is a psychologist, lifestyle and travel journalist, and member of the Society of American Travel Writers who produces MoreTimeToTravel.com, a blog offering advice and inspiration for travelers over 50.

Share
Irene S. Levine is a psychologist, lifestyle and travel journalist, and member of the Society of American Travel Writers who produces MoreTimeToTravel.com, a blog offering advice and inspiration for travelers over 50. Read More
Advertisement