An American Indian Reflection on COVID-19

A Next Avenue Influencer in Aging's views on loss, resiliency and relearning the ways of tribal elders

Twenty-eight years ago, when I was the director of the Navajo Nation's Head Start program, I traveled extensively to meet with the field staff on the reservation, which was about the size of West Virginia. I would take headquarters staff with me; the trip often lasted eight to nine hours. I particularly enjoyed traveling with a staff person who was a traditional medicine man and would tell traditional stories during these occasions.

One of these stories was about the history of the Navajo people, their experiences with different diseases and how they were mitigated. Long ago, he said, Navajo people were dying by the thousands from the diseases that beset the People. Finally, a group of powerful medicine men and women gathered and asked the Holy Ones how these diseases could be eradicated.

The Moon Landing and the COVID-19 Pandemic

They were told to gather all the diseases and bundle them up, offer a prayer and ask the Eagle to take the bundle to the moon and leave it there. Those diseases stayed there because only the Eagle could fly to the moon.

The bundled diseases stayed there until 1969, when the Apollo 11 mission landed on the moon. The radio transmission from the landing craft as it landed was "The Eagle has landed."

From an American Indian perspective — a Navajo perspective — it is ironic (or perhaps coincidental?) that since the moon landing, the world has had to deal with AIDS, SARS, Swine Flu, Avian Flu, Ebola and now COVID-19. The world now lives with the pandemic and other ills testing humankind. It would appear from a traditional tribal perspective that the diseases which had been sent away were brought back from where they had been placed to our own detriment.

While this view might not be considered evidence-based by the research community, it does, however, provide a glimpse into how COVID-19 can be explained from a traditional point of view.

The spread of the pandemic was made worse by humans ignoring traditional rules that were established long ago, and more recently those promulgated by the Centers for Disease Control and Prevention.

The Pandemic's Toll on Tribal Elders

Not adhering to these rules has resulted in the deaths of over 508,000 lives since the first diagnosis of COVID-19 in the U.S. Included in this number are over 4,000 American Indians and Alaskan Natives; over 60% of them were elders. This is equivalent to losing an estimated 160,000 years of knowledge, wisdom and experience.

The elders who are still here remain hopeful, optimistic and strong.

This is a loss that cannot be brought back. It represents the potential of losing hundreds of native cultures, traditions and knowledge that these elders held.

But the elders who are still here remain hopeful, optimistic and strong. This is resilience. They know they have gone through this before — many times before. We are still here, they say, and we are not going anywhere.

Positive Outcomes From the Pandemic

A common view among tribal communities is that there are two sides to every event: the negative and the positive. A positive consequence of the pandemic has been to reawaken an interest in relearning the traditional ways, the history and the culture of Indian peoples. That has been exemplified by the return to traditional foods, traditional ceremonies and natural medicines.

Another positive outcome of the pandemic has been the realization that the knowledge, wisdom and experience of Indian elders — their tribe's "living encyclopedias" — have made them even more important and precious and must be protected. Tribes have taken action prioritizing them for services, funding and vaccinations.

Governmental policies, rules and regulations regarding the delivery of these services were loosened during COVID-19, enabling tribes to truly exercise their sovereign authority to determine how best to provide these services.

Most tribal communities are characterized by their ruralness and remoteness. Services provided there pre-COVID-19 have changed, just as in other parts of the country, and tribal service providers have shown great creativity and flexibility.

As the superimposition of inflexible policies that limited innovation were lifted, tribes set up drive-in "bingo" cards to reduce the incidence of social isolation. Color-coded cards were placed in windows of elders: Red to denote needing assistance, Green to denote no assistance needed.

Color-coded cards were placed in windows of elders: Red to denote needing assistance, Green to denote no assistance needed.

Where internet was available, traditional ceremonies were streamed for viewing to ensure continuity and connection with their culture and customs.

Tribal gardens sprang up in Indian country, harvesting traditional foods using COVID-19 relief funds. Others used these funds to purchase livestock, such as chickens who could produce eggs and meals.

Tribal elders have long been esteemed and given the highest level of reverence. The pandemic has only reinforced and strengthened this. And by doing so, it has ensured that tribal values, customs, traditions and language will survive into the next century and beyond.

A Prayer for These Difficult Times

In closing, the following is my traditional prayer for all people and the country during these difficult times: 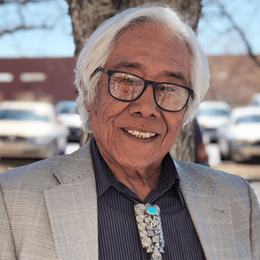 Larry Curley, a 2019 Next Avenue Influencer in Aging, is the executive director of the National Indian Council on Aging (which he founded) and a member of the Navajo Nation. Read More
Advertisement