OPINION: A Call to Older Black Men: It's Time to Fight for Youth

A call to action from an Encore Public Voices Fellow

Just a few weeks ago, 24 African-American teenage boys from a local high school in my Baton Rouge, La. community were recommended for suspension. Their crime: participating in a “fight club.” They were not involved in street fights, nor was there any intent to harm anyone. They were simply donning boxing gloves and boxing in locker rooms and restrooms after school.

Making an Impact on Lives of Young Men

I am a 63-year-old African American, college-educated man who grew up in the kind of neighborhoods these teenagers live in. I thought about them while flipping through the senior edition of my college fraternity quarterly — 21 pages, 24 photos of fraternity members over the age of 75, 504 men (I counted) who could have an impact on the lives of young men who need them.

I believe something profoundly different and immensely more powerful is possible — and needed.

From that moment, I’ve remained enthralled with the immense potential of meshing these two worlds.

African American men who are members of fraternities are already important contributors to the well-being of many communities across this country. Under the banner of their respective organizations, they are active in mentorship, mental health initiatives, voter registration projects, scholarship and a myriad of other meaningful undertakings.

But I believe something profoundly different and immensely more powerful is possible — and needed. Older African American men who are members of fraternities should be strategically engaged and deployed in comprehensive, community-based initiatives that connect them with inner-city youth and younger men.

Now I’m not oblivious to the fact that even 504 men are but a drop in the bucket when the need and opportunity are considered. But this is just one organization, and these are likely the most engaged and active group of African American men over 75. Imagine what happens when you lower the age to 60 and include all other historically African American fraternal organizations in the mix.

We could tap an increasing reservoir of older men who are part of what Stanford University professor Laura Carstensen describes as the “cavalry coming over the hill.”

The Challenge for Older Black Men

It has been widely reported that every day in America, 10,000 people turn 65. We now have more older people than younger ones for the first time in our history. Encore.org CEO Marc Freedman writes in his new book, How to Live Forever, that this human tsunami of wisdom and experience has a “set of skills — patience, persistence, and emotional regulation — that blossom with age.”

African American Greek letter organizations such as Kappa Alpha Psi, of which I am a member, are real and present microcosms of these important societal realities.

The challenge before us in this moment is to intentionally and strategically reap the maximum benefit for our communities. We must develop and embrace collective action that, as Freedman writes, engages “older people’s untapped talents in helping alleviate young people’s unmet needs.”

Overwhelmingly, the men who are members of these fraternities are college-educated. Imagine the potential impact if they began to show up consistently en masse in inner-city schools. These men could be immediately deployed in support of increased academic achievement and salient reductions in negative disciplinary patterns.

Beyond this important work, these men could become what Yale University sociology professor Elijah Anderson in his seminal work, Streetwise, describes as “old heads” in the lives of young men. In this role, we can offer practical, experiential insight into navigating life as an African-American male.

Before this compelling vision becomes reality, there are at least two significant hurdles that must be overcome.

First, we need to see African American males and inner-city neighborhoods through an asset-based lens. There are untold numbers of African American males across this country experiencing success and contributing to the improvement of the places where they live, work and play. Many of them, me included, are products of the very urban neighborhoods that are regularly held up in the most negative light. These harmful narratives must be challenged and new ones advanced.

Trabian Shorters, executive director of the BMe Community (a network of people who invest in aspiring communities), has advanced this effort exponentially with his asset-framing workshops. It is a foundation that must be built upon.

Second, we must begin to rethink what it means to be older in America.

Just as we boomers have redefined virtually every area of life as we have danced along the timeline, we are actively changing what it means to be older. Being 65 today means something entirely different than it did just 20 years ago. This evolution of perspective will only continue to progress.

An ascending bevy of thought leaders — Freedman, Chip Conley, Marci Alboher, Sara Lawrence-Lightfoot, Ken Dychtwald, Dr. Louise Aronson and many others — are generating a treasure trove of disruptive writings and interventions. Encore.org, AARP and the Modern Elder Academy are examples of organizational actors active in this space. Still, antiquated thoughts and practices associated with longevity remain and are deeply rooted in American culture. Much work remains to be done.

I am convinced that when we, as older Black men, realize the richness of the potential impact we can make in our communities — and when others see it, too — amazing things will happen. Young men like the 24 boxers in my community will find support, encouragement and guidance. Their lives will change for the better.

Embracing older, Black men as the assets they are will help us all fight for a better future. 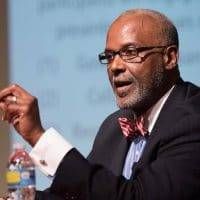 Raymond A. Jetson, a Next Avenue Influencer in Aging and former Louisiana state legislator, heads the Baton Rouge, La. nonprofit MetroMorphosis. He is a board member at Encore.org, a national group bridging generational divides. Read More
Advertisement