My Christmas Tree Ornaments, My Scrapbook

There's been a run on Christmas trees this year. So, fearing scarcity, when Stan called to say he would be driving over in a little while, I asked him if he would mind picking up a Christmas tree along on the way.

"Not exactly my area of expertise. Should I bring my mother's Menorah?" he said, half kidding.

Stan and I have been together for more than two years now, yet as I waited for him to arrive, I thought about how much we'd already lived before we met, and therefore how much we still don't know about one another.

I'm grateful to have them because they are as much portals as things — ways into moments that never have failed to be evocative.

We never met one another's parents, and his son, Steffen, lives in Denmark. Travel between the two countries isn't exactly brisk, so I still have no idea what father and son look like when they stand shoulder-to-shoulder.

Stan knows my Brooklyn son, Paul, pretty well, As for meeting my Seattle people (my son, Gabe, and his girlfriend), Stan met them when we flew west this summer, and now they'll be coming east.

By the time Stan arrived with a Christmas tree, I had set up the stand and was looking through the ornaments. Except my ornaments are not really ornamental.

Actually my ornaments are an essential part of what I guess is my living scrapbook of sorts — items that prompt me to remember the brightest and most benign moments in my story, my family's story and my friendships.

The Memories Behind My Ornaments

And yet all of them are so incidental and so mundane that if we weren't decorating the tree together, I might never have thought to share them with Stan. I'm grateful to have them because they are as much portals as things — ways into moments that never have failed to be evocative.

I keep them all in a wooden box that once held three bottles of Italian wine.

"What's this?" said Stan, before I explained, as he opened the box and fished out a wrinkled paper gift tag. "It doesn't look like a Christmas ornament. Should I toss it?"

"No!" I said. The gift tag, I explained, had long ago been attached to the wooden wine box it now lay in, a Christmas gift from my friend, Cynthia, who had done the toast at my wedding in 1978.

It was addressed to me and my husband, the red ink now faded. "Happy Everything!" it said. "Love, Cynthia." It was undated, and even though my husband and I later divorced, every year, year after year, I had hung it on my Christmas tree because it was still part of the family story.

That gift tag was not the oldest ornament, either, I told Stan, picking out a small wax Santa Claus with a hook atop red his stocking cap. It was a memento from my childhood. Santa's legs had somehow melted away, and the paint on one of his blue eyes was gone, making him look like he was winking.

A Wax Santa and A Rocking Horse

Around the edges of that waxen figure, I told Stan, I could still see the corner of my childhood living room, where the tree always stood, the bookshelf to its right, and the carved elephant table my father brought back from North Africa after World War II.

"That elephant table?" said Stan pointing to the one in the foyer.

Once my first son, Paul, was born, my mother was a regular presence when we decorated the tree.  For Paul's first Christmas, she arrived with a rocking horse ornament, imprinted with the year 1982.  That year, and every year after that, I explained to Stan, it has been the first ornament to go on the tree.

And so it has gone, with even the absent ornaments telling a story. Every year of my sons' childhoods, we would get a new ornament from a street vendor — one imprinted with the year, with either "Paul" or "Gabe" painted on it.

One year when Gabe was an adolescent, all the "Gabe" ornaments suddenly went missing. No one — and I wasn't going to mention any names here, I warned Stan - -has ever admitted anything, but it was always my surmise that the last thing an adolescent boy wanted were a dozen sentimental reminders of his childhood publicly festooned on a Christmas tree by his mother.

By the time we plugged in the Christmas tree lights, I had shared with Stan stories I might otherwise never have mentioned.

By the time we plugged in the Christmas tree lights, I had shared with Stan stories I might otherwise never have mentioned. In fact, these were experiences I had never really said aloud to anyone because I hadn't before felt the need or desire to.

Stan isn't sentimental (he hadn't brought his mother's Menorah which didn't surprise me), but sentiment moves him, and I could see it in his eyes. And he, too, had stories to tell about his mother's potato latkes.

The Christmas tree vendor near where I buy groceries told me today that Christmas tree sales are still brisk, for trees large and small. And why not?  We welcome brightness -- the Christmas tree lights or Menorah candles -- in our homes and the light of memories we can always find our way to. 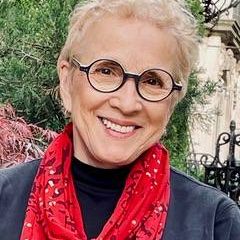 Elizabeth Stone, an award-winning essayist, has been published in The New York Times, The Atlantic, Newsweek, The Chronicle of Higher Education, and elsewhere.  She is an English Professor at Fordham University in New York where she teaches literature and creative non-fiction. Read More
Advertisement