The People Most Prone to COVID-19 Survivor’s Guilt

For 34 years, Trish Luberda of Exeter Township, Pa., and her husband, Steve, did everything together. In January, that included being diagnosed at the same time with COVID-19.

But while Trish, 57, would soon recover, Steve would be taken by ambulance to the hospital, where, 10 days later, he would die. Ever since, on top of the overwhelming grief of losing her husband at 60, Trish has been struggling with the guilt of surviving.

"Karlee put on her PPE. She took her iPhone in a biohazard bag and we had to say goodbye to him that way. That was probably the hardest, looking at him through those cold ICU glass doors."

"I keep thinking: If I'd been there, would it have made a difference? It's the what ifs, the should haves, the could haves — that's where I really hurt the most," she says.

"Maybe if I'd been there to hold his hand and tell him we love him and we're waiting for him to come home," notes Trish, even as she acknowledges it was hospital protocol that kept her away.

She also can't grasp why she was offered monoclonal antibodies, which made her feel "ninety percent better" almost immediately, and he was not, in part because of misinformation from his personal physician's office.

Born in the shadow of the Holocaust, survivor's guilt involves not only living while others suffer and die, but also feeling as though you've done something wrong or are even responsible for those who did not make it.

The psychiatric world's "bible" — the Diagnostic and Statistical Manual of Mental Disorders, Fifth Edition — folds in the syndrome with post-traumatic stress disorder or PTSD.

1. People Who Lost Someone Close to Them

The first is family members and close friends of those who died after being sickened with the virus.

Their guilt may stem, in part, from a sense of having potentially been responsible for the infection, or because once the diagnosis was made and the person confined to a hospital, those family members and friends were left helpless, unable to provide care or even stop by for a visit.

"The death is close to their own sense of who they are," says Harvey Brenner, a researcher at the Johns Hopkins Bloomberg School of Public Health.

These mourners tend to be very close family members such as mothers, fathers and children who could "almost see themselves as, in some vague way, not responsible for, but might have had closer contact [with the dying loved one], but didn't," adds Brenner.

For Trish, the closest she got was her oldest daughter, Karlee, who was allowed in Steve's room the day he died because, as a nurse, she had been vaccinated. Trish and her younger daughters could only look in.

"Karlee put on her PPE (personal protective equipment)," says Trish. "She took her iPhone in a biohazard bag and we had to say goodbye to him that way. That was probably the hardest, looking at him through those cold ICU glass doors."

Many of these survivors respond with an increase in negative behaviors, including letting diet and exercise routines go and medication regimens lapse, or newly abusing alcohol or drugs.

Spouses of COVID-19 victims, not surprisingly, are most likely to react this way, says Brenner.

2. Doctors and Nurses Who Lost Patients and Colleagues

"On top of the difficult decisions they have to make during a pandemic, a lot of health care workers have watched patients and colleagues get sick and die, and their feelings of guilt can become overwhelming," says University of Nottingham's Holly Blake, who has researched the psychological well-being of health care workers.

Brenner agrees: "They're the most likely to see this kind of survivor's guilt because they could have died. It's very much like soldiers in wars who were told to take the hill — so many of their colleagues are killed taking the hill, but they didn't die."

Dr. Eric Kutscher, a resident physician at NYU Langone Health, has struggled with the guilt of being a doctor during the pandemic.

"We lived with having to see people die on their own or having to be the person who FaceTimed the family into the room to see their loved ones for the last time. As a health care provider, you did everything to take care of that patient to the best ability you could, while recognizing you wish you could have done more," Kutscher says.

The challenge of being a medical professional in the middle of a pandemic and trying to keep pace with evolving data and practices — never mind the stress and exhaustion of nonstop caregiving — cannot be overstated says Kutscher. And in some ways, he says, it's difficult to know how to process how the situation unfolded.

"Part of survivor's guilt is understanding that once we make it through this, we need to look back and think about the pain we felt and process that."

"You'd be hard-pressed to find a single person who thinks the way we approached COVID last year is exactly how we would do it if it came now. But we're limited by the knowledge we have at the time, and we do the best we can for the patients," he says. "I think you sit with that."

Kutscher himself had a flu-like illness in March 2020 but chose not to be tested for COVID-19 antibodies. After being vaccinated late last year, he published an editorial reflecting on the tangle of emotions that came with that privilege, coupled with his time on the frontlines, including a 24-hour period in April 2020 when three patients died.

"We were both in this fight against the virus — we were both vulnerable to the virus," he says of his COVID-19 patients. "I survived and many of them, unfortunately, didn't."

3. People Who Didn’t Lose Anyone or Anything

The third group prone to COVID-19 survivor's guilt are those Americans who were minimally affected by the pandemic in the long run — they kept their homes, health and jobs.

"COVID itself caused considerable economic loss in many parts of the population, especially in lower socioeconomic groups who can't work from home," explains Brenner. "Not experiencing that loss when one's neighbor and co-worker does gives rise to all sorts of survivor guilt syndrome."

He has studied the long-term mental health effects of economic downturns and recessions and is hopeful government expansion of mental health services will be part of the recovery.

As vaccinations continue and infection rates drop nationwide, most hospitals are easing visitor policies. Many restrictions remain in place for people who want to visit someone hospitalized with COVID-19, but Kutscher says he's grateful he can bring people together when a patient is dying, something he couldn't do a year ago.

Yet he is concerned Americans have begun to normalize what was once alarming.

"I don't want us to be comfortable with any of these deaths from COVID, recognizing that it's a preventable illness, that we can stop its transmission. Until COVID is eradicated, we aren't doing justice to those who have passed," Kutscher says. "Part of survivor's guilt is understanding that once we make it through this, we need to look back and think about the pain we felt and process that."

Within a month of her husband's death, Trish Luberda started seeing a trauma therapist who helped her understand there was nothing more she could have done.

"He had zero chance of recovery — it was like a lightning bolt struck," she says.

Now that she and her three adult daughters are vaccinated, they're planning a July celebration of Steve's life. Still, the guilt lingers.

"He was always the healthiest of the two of us, and that's why I can't wrap my head around it," she says. "Why did he die and I'm still here?" 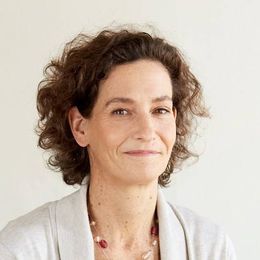