Grooving With the Mardi Gras Indians

Seventy-year-old Wayne Sizemore has been an artist of some kind at almost every point in his life – even during the COVID-19 era, when much of the world was under lockdown.

"Performance art was really brewing in me from the time I was a little kid," said Sizemore. "I sang in church once and I think I was bitten. I have a broad background and I want to participate in any art form to see if I have talent in it."

He has even dabbled in African dance, so during the pandemic, when Sizemore came across an online class called African dance in New Orleans, he signed up.

The free, six-week class was hosted by the Louisiana State Museum in conjunction with its exhibit, Mystery in Motion: African American Masking and Spirituality in Mardi Gras. Mystery in Motion honored Black masking Indians, also known as Mardi Gras Indians, and celebrated their sartorial creations.

"I think the class just went so deeply to the heart of the African American culture here."

"The Louisiana State Museum has offered other courses similar to this for older folks," said Sizemore, a New Orleanian, noting that he already had taken two classes hosted by the New Orleans-based organization.

This particular course explored African traditions and influences on New Orleans culture and dance, particularly the dances of Congo Square.

The Historical New Orleans Collection describes Congo Square as a place where "free and enslaved people of African descent gathered on Sundays and shared their varied musical traditions — typically centering on the rhythms sounding from drums and captured in the steps of dancers."

The musical tradition began during the first decade of the 19th century, around the time New Orleans became an American city.

"I think the class just went so deeply to the heart of the African American culture here," said Elizabeth LaRose, 67, a course participant who lives in New Orleans. "It was just such a gift to learn on a deeper level just how deep that runs here."

'Any Movement Will Benefit the Body'

Each online session was led by Ausettua AmorAmenkum, the director of the Kumbuka African Drum & Dance Collective, which is based in New Orleans, and the Big Queen of the Washitaw Nation Black Masking Indians.

In addition to teaching African and hip-hop dance at Tulane University, AmorAmenkum, 65, also serves as the co-director of The Graduates, a performance group comprised of formerly incarcerated women.

"I'm most proud of the work that I have done in prisons where I get diverse populations. So, when the opportunity came to me to do a dance class for seniors, that resonated with me as well, because I felt like many times people write seniors off," said AmorAmenkum. "They feel that, 'Oh, they're old, they have challenges.' But I believe there are ways that you can tailor the teaching to fit them, because any movement will benefit the body."

AmorAmenkum began class with dances that originated in West Africa, and then focused on the Calinda, "the dance of Congo Square," which was brought to Louisiana from the Caribbean by slaves.

"I stood there by my computer and tried to follow the dance steps that she was so diligently teaching us," LaRose said, noting that she was especially interested in the educational aspect of the course.

"We had a wonderful, wonderful experience," AmorAmenkum said.

Participants hailed from New Orleans, of course, but also California, New Mexico and other areas of the country. Most were familiar with Congo Square and African dance, said AmorAmenkum, but they had not explored the topics to this degree.

A Final Class Dance Together

Still, the class didn't exactly go off without a hitch. Both the instructors and the participants endured the technical snafus that so often come with online presentations: time delays, poor reception and sound issues.

Sizemore seemed to contend with all of those challenges – and then some.

"The drums, their reverberations would hit so hard that I would not be able to hear anything else that was going on – anything that's being said or any instruction," he explained.

Sizemore also deemed it difficult to cultivate relationships with classmates.

"I stood there by my computer and tried to follow the dance steps she was so diligently teaching us."

"That was something I felt like there needed to be more focus on making sure that that happened," he said. "If we had been in a building together, of course, that would have happened just by the fact that we were together."

Sizemore followed the course by using an iPad a friend had given him. The screen would display "nine people at a time, at best," he noted. But since he stood away from the iPad while attempting to perform his dance moves, those people appeared tiny and Sizemore couldn't mimic what they were doing.

Despite those problems, however, Sizemore considered the course a success.

"It was a huge task to try to teach classes online like that, and I really appreciate that they hit it head on," he said, noting that he thought there would be a benefit from additional instruction to handle technology issues as they arise.

Fortunately, the final dance class had a much different vibe and went more smoothly. It was held in-person, in Congo Square, on April 7.

"It was so nice to see the faces of people that you saw online all the time," said AmorAmenkum, who also acknowledged the challenges of teaching online. "I was humbled and honored to be able to work with them."

Since Sizemore was still uneasy about being around other people; he kept his distance by dancing to music he recorded on his phone.

LaRose, on the other hand, safely joined the Congo Square gathering and said the experience capped off the course in the very best way.

"The instructors absolutely did their best with Zoom, but once you were live, right there with (AmorAmenkum) and just her great energy, it was so much easier to follow and get into. And also, there's the group dynamic and the live drumming," LaRose said. "I tried my hardest when it was online, but it wasn't until we were all together that it really came alive for me."

The Louisiana State Museum plans to offer another online session in the fall; more information will be available on their website. 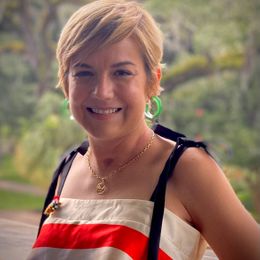 
Suzanne Pfefferle Tafur is a frequent contributor to The Times-Picayune | New Orleans Advocate. She also writes for New Orleans Magazine, among other publications; and she has produced two food and culture documentaries for WYES-TV, the PBS affiliate in New Orleans. Although she loves to travel, Tafur lives happily in New Orleans with her family. Follow her on Twitter @suzpfefferle. Read More
Advertisement