Finding Love Again After the Death of My Spouse

My husband had just passed away. A new love was the furthest thing from my mind.

According to estimates from the U.S. Census Bureau, as of April 2021, 69% of those widowed in the preceding year were women 65 and older.

"What's the right amount of time to wait before dating?" I asked my cousin who recently lost her husband.

Without hesitating, she answered, "Since we're in our seventies — one day."

Just a few months before, Steven, my husband of 45 years, passed away unexpectedly from complications of what was supposed to be a "walk in the park surgery."

To say I was devastated is an understatement. Steve was the light of my life. It was just the two of us and a beloved cocker spaniel, Cassie, who died at 15 at the start of the pandemic.

Now I was alone and finding new love was the furthest thing from my mind. Even if I wanted to, the odds were against me.

And then there was Bill.

Bill lives one floor above me in a New York City apartment building. We've known each other superficially for twenty years.

His wife, Maggie, and I were close friends and had a lot in common. We were the same age, several months older than our husbands, married days apart in June 1976, and had many of the same interests. Once a year, we formed a group of friends and family to raise thousands of dollars for the Leukemia & Lymphoma Society.

During her final days, four years ago, I visited Maggie in the hospital. As she lay deep in a coma, Bill sat next to her swallowed in grief.

The Support of a Friend

Both of our spouses had been ill for years. For almost a decade, Steve couldn't eat or drink by mouth — a side effect from his treatment for throat cancer — and got his nutrition from a feeding tube.

I prepared dinners for one and sat at the kitchen table while Cassie sat close by, lapping up any dropped food. Steve watched cooking shows. And then he started cooking for me. Often, I felt guilty for being healthy.

Bill lives one floor above me in a New York City apartment building. We've known each other superficially for twenty years.

After Maggie passed away, my husband and I took Bill out to dinner to be supportive. Now, it was Steve who was gone, and Bill was reciprocating.

"Come to Fire Island," he texted at the end of June. "You'll have your own bedroom and bathroom. We won't be there alone. My daughter, her husband and baby will be there. It'll be good for you to get away."

I accepted, throwing away any hesitations. Yes, I thought, it would be good for me.

Overlooking the water as the sun set on a warm July evening, we ordered cocktails. "Straw please," I requested.

The drinks arrived but no straw. I repeated my request. Five minutes later, Bill left the table and came back with a bamboo straw. I knew then he was the one for me — thoughtful and protective. After being a caregiver for my husband for so many years it felt good to have someone watching out for me.

We rode bicycles, took long walks along the beach and enjoyed eating in informal outdoor restaurants — activities we both enjoyed but our spouses were no longer able to do in the last years of their lives.

As I was leaving, he walked me to the ferry and moments before I boarded, he kissed me for a brief moment on the mouth. Even though his lips were closed, I felt the sparks throughout my body.

Later, Bill texted. "I've been offered another week to rent the house. I'm only interested if you'll join me."

Feeling Conflicted About A New Relationship

This time it would be just the two of us. Two people in our early seventies who hadn't been intimate with anyone for years. I missed my husband and tried to balance my grieving with the excitement of being with Bill.

My cousin's words echoed in my mind. Go for it, I told myself. Take the risk.

Frequently we text and say, "I love you." Sometimes we say, "I have to pinch myself."

But questions still troubled me. When is it okay to be intimate with someone after your spouse passes away? Is it okay to become emotionally involved with the spouse of your deceased best friend? Will people think I didn't love Steven?

Consulting my therapist, he asked, "How long would it take for you to be ready for a new relationship? One year? Ten years? Never?"

When I didn't react, he paused and said, "There's room in your heart for both. I'm thrilled you met someone."

From the moment I arrived at Fire Island that second time, we couldn't keep our hands off each other. It was as if our bodies were alive again. No rush. Touching, caressing, and kissing were more important than actual sexual intercourse. When your spouse is ill, having sex is the last thing on your mind. Now we were voracious.

My therapist was right. Steve will always be in my heart but there is room for Bill. Even Steve had agreed. We gave each other permission to be with someone else.

"If I die before you, I want you to be with someone," my husband said many times.

No matter what happens in life, we promised to be buried next to each other.

It's been seven months. Bill and I have no plans to marry or live together since we both like our apartments, our space and our independence. Yet we're committed and spend a lot of time together traveling, laughing and sharing the bed in my den from a pull-out coach — a neutral space from our marital beds. We make each other happy, happier than I've been in over a decade.

He calls me Bunky and I call him Amorris — a play of words on "that's amore." I'm conscious of not using the same words of endearment I said to my husband.

Frequently we text and say, "I love you." Sometimes we say, "I have to pinch myself."

In our respective apartments, photos of our late spouses are displayed and we bring them up in conversations instead of hiding that part of our lives. Increasingly, photos of us inhabit our devices — photos of us laughing and enjoying being together. Soon I'll frame our favorites.

Life is short. We've learned it intimately and are seizing the moment by being there for each other and letting our new love flourish. He had me at the straw and it's only gotten better. 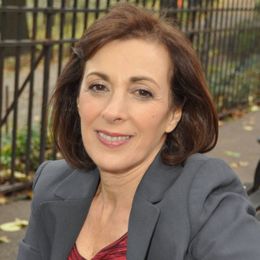 Ann Gorewitz Ann Gorewitz, a native New Yorker, has written for HuffPost, LivingBetter50, Next Tribe, The Daily News, USA Today, and Yahoo Singapore. Her memoir in progress, "You, Me and The Dog: A Love Story in Sickness and in Health," is an inspirational story about the joy and comfort Cassie, a cocker spaniel, brought into her life especially during her husband's eleven year illness. @Gorewitzann on Twitter and Instagram. Read More
Advertisement