His 89-Year-Old Mother Encourages Him to 'Keep Rowing'

"Some people here are afraid of the vaccine," my 89-year-old mother said of her neighbors in her senior living facility on the southeast coast of England. "Not me. I'll be first in line."

After almost a year cooped up in her tiny apartment with only the TV and daily FaceTime chats with her three sons for company, my mum, Raj, was, at last, getting her first COVID-19 shot. No one was more relieved about it than me. I'd been petrified when she was diagnosed with a heart condition after having a stroke four years ago.

Back then, like sparks racing up a fuse, one thing going wrong seemed to lead to another. Just before the virus struck, she instructed, "Call 999," the number for emergencies in England. She looked disoriented, sitting lopsided on the sofa, her speech slurred. I feared another stroke.

The Dilemma of My Single Status

By midnight, my oldest brother, Tony, was by her side in the hospital. My mum had suffered vertigo and lost her balance, but would be okay. It had been the fourth time in a year she'd been hospitalized. Dehydration and fatigue were the symptoms, but the cause was her increasingly fragile health.

Now the countdown was on to her second vaccine.

Mum, though, had other things on her mind. She's viewed my newly single status as a dilemma even more serious than a potential bout with COVID-19, consulting friends in London and Jaipur, inquiring about available Hindu Brahmin brides who might make a suitable re-match two years after my divorce. My insistence that she stop fell on deaf ears, or rather, partially deaf ones.

"You need companionship," she said.

"I'm not ready yet," I replied. "You need to worry about yourself, not me."

As the youngest of three, now all over 50, I was always closest to her, especially since we lost my dad from a heart attack two decades before. My breakup tightened our bond.

In isolation, despite my living in the U.S., we've become our own support system, our plus one.

In isolation, despite my living in the U.S., we've become our own support system, our plus one. I'd call her at 9 a.m. and she'd call before she went to bed, lip-reading while my voice boomed in from New York at stadium level decibels through oversized headphones.

Our conversations began with mum firing off intimate questions as we battled to know important facts first.

"Will you talk to Mrs. Khurana's daughter?"

"Not now. Did you take your medicine?"

"Yes, this morning. Did you get health insurance?"

"Did you get your prostate examined?"

"No mum, doctors are busy. Have you eaten today?"

"Yes, I heated up some soup. I get very tired standing at the cooker."

With my own vaccination months away and international flights impossible, FaceTime has been invaluable. Sometimes, Raj accidentally calls one of my brothers or a friend instead of me, pressing the wrong button on her iPad, and occasionally I'll answer a U.K. number on my phone only to see a silver-haired Indian aunt with a shocked expression. But considering mum was born when the British still ruled India, she's adapted to technology remarkably well.

"Jeff, it's really time mum had a home attendant," Tony said. "We have to talk her into it once the pandemic ends."

Tony had tried before, but she viewed having help as a sign of weakness. We'd always been fighters and fiercely independent. Pregnant with me, her water broke two months early. After examining her, a local English doctor ill-advisedly suggested she keep her bed raised at an angle by putting books beneath two of the legs. It was only when an Indian physician friend came to visit that he insisted she go straight to the ER.

"You were the size of my hand when you were born," she told me. "You couldn't even make a sound in the incubator. No one believed you would live." My twin brother didn't make it.

Attempting to Align the Stars Again

In my early 20s, I'd return home from a soccer game only to find a demure young Indian woman and her family waiting for me in the living room, tea, burfi and gulabjamon (Indian sweets) in a spread before them. Now, after my marriage ended, mum was attempting to align the stars once more. This time, in middle age, it felt ridiculous.

Mum insisted the only way forward was to "keep rowing." She often recited a Hindi proverb to that effect and imitated a rowing action.

My teen daughters were my only female companionship this past year. I didn't anticipate the crushing loneliness that came when they weren't around. It sent me running out of the house on sprawling country walks, desperate to get out of my apartment. The breakdown of my relationship had left me unconfident and unwilling to date.

Mum insisted the only way forward was to "keep rowing." She often recited a Hindi proverb to that effect and imitated a rowing action. But I'd lost my oars, and my boat seemed to be taking in water. I hadn't told her about my insomnia, or the times I'd feel a heaviness in my chest, often when I was driving, as if breathing in something thick and heady, pulling over until the moment passed.

In my 50s, I lacked the desire to put myself back out there again romantically. I'd been on dating sites populated by attractive women with great careers who checked the box next to "definitely want kids." Other women closer to my age already had kids. I didn't earn enough to support a new family. I had child support, soccer fees, a mortgage and two teens nearing college. I felt like an exhausted mountaineer suffering from hypothermia. It was easier to just lie down.

I'd secretly harbored the notion of quietly moving back to England, seeing my old school friends, watching football games with my brother and taking walks on the beach where I grew up. I'd be able to take care of mum and work remotely as I was doing now.

"You're running away," Tony said, when I told him about coming home. "Your girls would never forgive you. You've got to deal with what's in front of you."

I thought about mum and her rowing analogy. Her stubbornness had always been as strong as her love, handling everything life threw at her — the loss of a child, dad's death, a stroke — and still managing to care more about her sons than herself.

I realized that she'd led a full life, surrounded by her family and friends. But it had taken her a decade after dad passed to throw out a dozen of his suits and finally buy a flat in a senior living facility. And, a year after that, to move in. It had all been incredibly tough, but she did it.

Now I had to follow her example and do what I did over 50 years ago in a London hospital: Open up my heart and live. 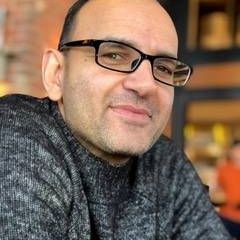 Jeff Vasishta has enjoyed a long and varied journalism career both in London and the U.S. where he has written for Rolling Stone, Variety, Interview, NY Newsday and many others covering music, books and real estate. He is currently working on his debut novel about Brooklyn gentrification and the music business. Read More
Advertisement