My Satisfying Return to Work After Months Away During the Pandemic

Today was my first day at work in a year and a half. I was nervous. I wasn't sure how much I remembered – procedures, where files and supplies were. Also, the library had gotten a new phone system and a new computer system in my absence, and much of the collection had been moved around.

I needn't have worried. It turned out to be the best day I have had since the pandemic began.

Semi-retired, I'd been working as a part-time reference librarian in one of the public libraries in New York's suburban Westchester County since 2007. Then came the March 2020 lockdown. The library re-opened in June 2020, at first with curbside pickup, then gradually, with full indoor service. I am the only staff member who didn't return. I am also the only staff member who took public transportation to work. There was no vaccine yet.

I didn't want the library to forget me, though, so for more than a year, I did monthly flyers for their website on a volunteer basis.

Today, I got back something I didn't know I was missing. I felt vital and connected.

I am 79 and live alone. I got through the pandemic by taking walks in my neighborhood and posting about them on Facebook. I Zoomed. I took an online yoga class. Virtual connections are better than no connections, but they aren't deep-down satisfying.

In June, my supervisor said she was preparing schedules for the fall. She asked whether I wanted to return. I was now fully vaccinated, and I did want to come back. We arranged that my first day would be in September, but because I had been away so long, I asked whether I could come in one day in August for a refresher. That day was today.

This morning I made my old commute – two subways, then the railroad. On the half mile walk from the train station to the library, I saw one of the regular patrons, whose name I didn't know but whom I had often helped. He smiled as he came toward me from the opposite direction. "It's so nice to see you," he said. He remembered me from a year and a half ago!

The library staff welcomed me and made me feel special. I met two newbies who had started during the past year. The library director gave me a homegrown cucumber. It was very fat. "You'll probably want to throw away the seeds," he said.

Everything Came Back to Me

My old mailbox slot was still in the workroom, crammed with stuff I had left in it a year and a half ago, and also with "new" stuff that was no longer current. It appeared that whenever a copy of something was put in everyone's mailbox, mine was included. I hadn't been wiped out.

My supervisor gave me a refresher course. To my surprise, I hadn't forgotten as much as I thought. Or if I had forgotten, when she started explaining, it all came back to me and she didn't have to elaborate.

The best part was that after the initial welcome, everyone went back to their jobs, and I did, too. I was working alongside my colleagues. I was part of the machinery again.

Today was only a refresher. I start for real in September. But today was the proverbial shot in the arm. The pandemic has been catching up with me lately. I've been really down for the past month. Today, I got back something I didn't know I was missing. I felt vital and connected. I felt part of something larger than me. 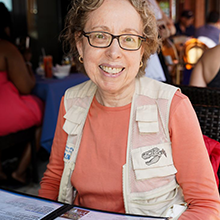 Vivian Conan is a writer, librarian, and IT business analyst who lives in Manhattan. A native New Yorker, she grew up in a large Greek-Jewish clan in Brooklyn, graduated from Brooklyn College, and holds master’s degrees from Pratt Institute and Baruch College. Her work has appeared in The New York Times, New York magazine, Lilith, Narratively, and Ducts. Her memoir is "Losing the Atmosphere."
Read More
Advertisement