How Listening Can Improve Your Health and Well-Being

What happened to us during COVID-19 to create such a deep need for listening?

By nature, I'm curious. Listening to others share their life experiences is a core strength I developed as a recruiter in the tech industry and refined during my work as a writing coach.

After months in lockdown, while socializing again, I found myself overwhelmed by the speech patterns of friends, neighbors and colleagues who talked in rapid fashion, as if emptying themselves of any story left untold.

The pandemic forced us into facing the computer or sitting on the couch. Our interactions were defined by a flat screen or an equally flat day.

Then, a text arrived from a close friend. She noted how the past 18 months had prompted a desire to connect more with people who listened to her. My youngest sister also phoned. She wanted to discuss our relationship and how we needed to listen to other one with more intent (we're Italian and we typically trip over one another's sentences).

What kinds of listening were they referring to, and what happened to us during this time to create such desire to be heard? How can we improve our listening skills for each other — and ourselves?

Webster's Dictionary defines listening as paying attention to sound. Here are a few specific types of listening that can benefit us all:

The National Institute on Aging recommends active or reflective listening when communicating with loved ones, first by making eye contact, which encourages everyone to focus.

Second, slowing the conversation provides ample time for a response.

In the past months, we've all had need to mourn a loss.

Third, minimizing distractions and limiting interruptions keeps the emphasis on the present topic. Giving space to breathe, think and act is empowering in any conversation.

In my writing groups, we also practice this strategy. Writers read their works aloud. After, we echo back a few of the writers' phrases that intrigued us, signaling their words have been heard.

My friend, Lisa Burns is active in her small, urban church in northern Kentucky where there is a great need for food, shelter and hope. During the pandemic, she became a vessel into which others poured forth their lives. She had nowhere to empty out her own. On the other hand, my sister, single and working from home in Cleveland, was tired of the baseline screen interactions with colleagues who she once chatted with at the office's proverbial water cooler. They both longed for deep listening in their lives.

Listening 'Inside This World'

The pandemic forced us into facing the computer or sitting on the couch. Our interactions were defined by a flat screen or an equally flat day. Television shows like "Ted Lasso" and "The Queen's Gambit" were attention-grabbing, but were we paying attention to the sounds around us? My friend Lisa was a gregarious person with plenty of family living nearby. My sister lived alone. How had listening become so critical to both?

In the past months, many of us had a need to mourn a loss. We've sought experiences that would deepen or mend any connection that had been severed and longed for the company of someone who could patiently sit in the discomfort of words we needed to say without interjecting with a more gripping story of their own. During Rob Lowe's "Literally" podcast, Oprah Winfrey also reminds us, "A willingness to ask other people what happened to them, opens up an aperture for that question to also be answered by yourself."

Shopping at a plant nursery this past spring, I asked a clerk to point me toward the pots of lavender. She clapped her hands, excited to talk to someone — about lavender, about anything garden-related. "It's been a long winter," she said.

My feet cramped in tennis shoes and my temples throbbed in the early heat. Though not pressed for time, I was tired. Despite my hurry to buy the flowers, I immersed myself in the chat about plants and remembered, "It's not about me."

To paraphrase the poet, Mary Oliver, we were born to look, to listen, to lose ourselves inside this soft world.

Here are a few tips to listen and stay engaged: 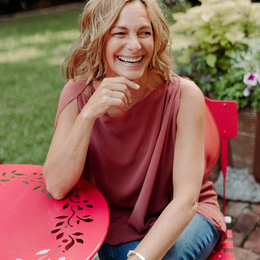