I'm lucky I have a husband who knows not to eat a raw carrot or an apple in my vicinity. John also accepts the fact that the "flick, flick, flick" of floss exiting from between his teeth will send me screaming from the bedroom, plugging my ears.

I was about 14 when I first realized that the clinking of a fork on a tooth made me want to leap from my seat and shriek at the offender. Other sounds that provoked the same response included the retainer clicking of the girl who sat behind me in English class, and all types of gum snapping, smacking and popping.

Those who have misophonia might describe it as 'when a sound drives you crazy.'

It took decades before I learned that I have misophonia, according to Dr. Phil, the internet and a few fellow sufferers. WebMD says misophonia is "a disorder in which certain sounds trigger emotional or physiological responses that some might perceive as unreasonable given the circumstance. Those who have misophonia might describe it as 'when a sound drives you crazy.' Their reactions can range from anger and annoyance to panic and the need to flee."

Poor John. I've worked as hard to control my noise-related complaints as he has to control the noise, and I thought we knew every sound that could possibly prompt my seemingly irrational fight or flight response. Until he retired. And started working in the home office which has long been my solo domain.

The way he typed! The rapid rat-tat-tatting burrowed into my brain and threatened my sanity. And his talking on Zoom! The man is normally so soft spoken, he's inaudible in a noisy restaurant. But the booming voice he used for virtual meetings jolted me from my chair and made me want to silence him — perhaps permanently.

Objectively, I knew his typing wasn't loud. If we held a decibel meter beside his keyboard, it would barely move. And most people would probably describe his Zoom voice as energetic rather than thundering. But I wasn't convinced he could consult and I could write at desks that are eight feet apart.

Of course, I tried ear plugs, but I think I might have injured my eardrums by shoving in the foam pellets much farther than the instructions suggest. I tried headphones with music, but I could still hear his tapping between the end of one song and the beginning of the next one. And if I didn't hear it, I waited for it, which was just as bad.

Then John suggested air pods, so I bought each of us a pair, tested them with a few tunes, and yelled, "This is great! The music is right inside my head!" The pods were better than the plugs, but it didn't take long to realize that the pauses between songs still left just enough space for the tapping and the talking to intrude.

And then something so coincidental happened that it couldn't have been a coincidence. I was scrolling through Facebook and landed on a post about healthy ways to cope with the pandemic. It referenced a website called myNoise, an online noise generator that houses auditory soundtracks to help with everything from sleeplessness to anxiety to ADHD

'Rain on a Tent' Did The Trick

I went to the site, plugged in my air pods, and tried a few tracks that sounded promising.The Irish Coast was described as being "good for focusing in a noisy environment." Pebble Beach was suggested "for those who work in an open space office." And Autumn Walk was "for a writer in need of inspiration." They were all okay, but not quite all-encompassing enough for me.

If I were prone to hype, I would say it was miraculous.

I kept experimenting until I tried Rain on a Tent, which was recommended for "people who want to fall asleep." The sound of deep rumbling and the pelting of water on canvas completely drowned out John's keyboard sonata and spirited conversations — especially when I turned up the volume. Even better, I had no urge to take a nap. If I were prone to hype, I would say it was miraculous.

John continues to work with a reasonable level of rock and blues filling his air pods and I work while rain pours on my tent. When my head is filled with the noisy deluge, I am peaceful and productive, but I always forget about my pods and speak loudly enough to be heard six blocks away.

John copes admirably. As the long-suffering target of my auditory weirdness, I'm sure he's grateful that instead of being assaulted by "Pleeeease stop talking like that!" and "Your typing is making me crazy!" he's now on the receiving end of high-volume "DID THE MAIL COME?" or "IS IT TIME FOR LUNCH?"

In our house, that's the sound of progress. 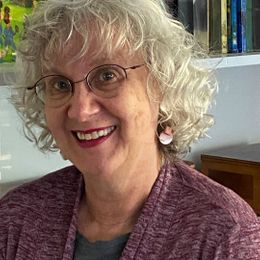 Mary Ellen Collins has been a columnist for The Arizona Republic and Angie’s List Magazine; and her essays have appeared on the Erma Bombeck Writers' Workshop blog and in Notre Dame Magazine, Writer’s Digest, The Christian Science Monitor, Outdoor Life, and SASEE Magazine.
Read More
Advertisement