My Gray Hair Is An Asset, Not a Shame

"I don't want you to get mad at me, but I think you should paint your head again," my 80-year-old dad told me over the phone. Two and a half years ago, at age 50, I'd let my hair go natural, embracing streaks of silver in my long brown hair.

My dad knows my company went through devastating layoffs a few months into the pandemic that included my beloved mentor and boss two months shy of his 60th birthday. "I think you should suck it up and go back to dyeing your hair," said my dad.

The work world is even crueler to older women who take longer to find new jobs.  My chosen profession, journalism, is rife with age discrimination. It won't matter that I've won a Peabody and other top honors in my field.

My dad cited a friend of his, a successful partner at a law firm who dyed her hair dark brown into her 70s and never lost a case. Her strategy was not to look "old." I think she missed an opportunity to show people what an attorney at the top of her game really looks like.

Dad's advice came a little late and felt especially out of touch given how the pandemic has changed us. Who would be fooled if I returned to the office — whenever we're allowed to return — sporting my old fake brown? More importantly, why would I ever resubmit to dyeing after I've tasted freedom?

Ready to Quit the Dye

It was a conversation we'd begun two summers ago, around my 50th birthday. We were sitting in my parents' backyard with my aunt and my husband. "I think I'm going to stop dyeing my hair," I announced. "Oh no!" they all said. "You're too young to let yourself go!"

My husband joined the chorus about age discrimination in my profession. I swung around, stung by his betrayal. The older generation's reaction I could dismiss as dated thinking, but his?

"Your job," I said pointing my finger at his chest, "Is to say, 'You. look. beautiful. honey.'" He looked down. My family clambered to his defense.

"I think I'm going to stop dyeing my hair," I announced. "Oh no!" they all said. "You're too young to let yourself go!"

The next morning I told my husband I was more convinced than ever that I was going to quit the dye. He smiled at me and said, "There was never any doubt in my mind."

A few months later, my natural color extended to the barrette where I tacked my hair up into a sloppy French twist. This left a blob of fading reddish-brown fuzz, but at least it was out of my sight. No one said a word.

I remembered my own annoyance looking at the roots of an older colleague in our newsroom thinking, "Gross." By Monday, she'd usually come in with her hair back to a dark monochrome. Then, suddenly she went all gray.

None of us knew she was sick with cancer. I don't know if she stopped the dye for health reasons or because she didn't need to play the charade any longer. She died at 54 before I had the chance, or bravery, to ask her.

I spotted my first strand of gray in my 30s. I'd dashed to the ladies' room during a break from the live news show I was directing. I glanced at my reflection in the mirror as I washed my hands. A single strand of white snaked through the brown curls above my forehead.  "This job is making me go gray," I thought.

We'd go live to a reporter in the field and the line would go dead or a story wouldn't be ready and my host would have to fill until I could whisper through her headphones where to go next. I was sure the renegade follicle had seized up during one of these adrenaline-fueled moments of terror and flipped the switch, the color never to return.

By my 40s, there were too many silvers to pluck and I began buying the occasional box of brown dye. I was haphazard about this fool's errand. Months between home dye jobs soon shortened to six weeks, to monthly, to finally, covering my roots every three weeks.

The home dye was cheap, but the dark brown quickly faded to a reddish-orange no matter which shade I picked. I look back at photos from that decade of my life and cringe.

Time to Stop Being Complicit

But it was a strong decade for me professionally. I covered stories that exposed wrongdoing and won awards named after famous men. I began thinking about courage in the workplace. Some of my stories hinged on whistleblowers who risked everything to speak the truth. If someone with my tenure and awards shelf couldn't risk being themselves, who could? I didn't want to be complicit in erasing older women from journalism. I'm here.

I found private groups on Facebook like "Going Grey Gracefully" where tens of thousands of women support each other in the subversive act of shucking off ageism and the patriarchy. They post selfies of their transitions and recount cruel things loved ones and people in grocery stores say to them. Their silver sisters cheer them on: "You look beautiful!" "Keep going!"

I've reminded posters that people who say cruel things only reflect the larger brainwashing of our culture. What we're doing is countercultural. It isn't easy to lead change.

The more of us who do it, the easier it will be for those coming behind us to skip the dye altogether.

And then the pandemic hit. Suddenly no one could go to the salon. Fancy events were canceled. We just had to make ourselves look passable on Zoom or turn our cameras off. This was our jailbreak.  My most-liked Facebook post of the year was a selfie I took in my living room, silver showing on my crown and temples.

I wrote, "The pandemic is revealing our roots. It's an opportunity to heave off the yoke of the beauty industry, and its nasty drivers: ageism and sexism. Seize it."

I began noticing older women on my Zoom calls were going gray in droves. Women in leadership roles suddenly went from sleek mahogany to dramatic streaks of silver. I wanted to cheer. They looked beautiful. Less chemical dye was going down our drains each month.

The more of us who do it, the easier it will be for those coming behind us to skip the dye altogether. The most common comment I hear is, "I wish I had done it sooner!"

So, dad, I will not be painting my head again. My kooky silver curls stand for a more inclusive society where gray is an asset, not a shame. And in this pandemic, when so many are no longer among us, I feel lucky to be alive, living in this body, grateful and free. 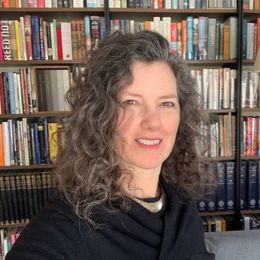