Donate
Follow Us
Advertisement
Part of In Good Company

While saying these words, I had the weird sensation of watching myself from the ceiling. As if my spirit had already left my body and joined Michael on the other side.

Before he died of cancer at 58, we'd been married 33 years and shared so many lovely things. Michael was a writer, too, and when we teamed up as co-authors, the results were dozens of articles, one well-reviewed book and two poetic daughters.

Ever since I was old enough to eat blueberry pie, I've been swimming in that same dreamy lake in Maine.

In the middle aisle of the church that day, I was gripping the wooden podium so hard, I could see the bones in my hands. "It was a relief when you started to sob a little," a friend told me afterwards.

I guess I wanted to prove I could keep on going, even in my darkest hour. Soon after the funeral, I was right back to meeting deadlines at my magazine job. During off hours, I'd swim as fast as I could at my neighborhood Y, thinking that would help.

But swimming laps in the middle of Manhattan definitely had its downsides. The water was so chlorinated, I felt like I was swimming through cleanser.

So as summer was approaching, my thoughts strayed to the little log cabin on a Maine lake that my teacher parents had built for their retirement.

Our daughters, one in college and the other in grad school, were thinking of it, too. They said they'd come and help me bury their father's ashes in the lake. That settled it.

Ever since I was old enough to eat blueberry pie, I've been swimming in that same dreamy lake in Maine. The water can be shockingly cold when you first get in, and the big boulders under the waves are just waiting to skin your shins.

But I couldn't let myself worry about the boulders or the bears in the woods or the bumpy dirt road I'd be driving down all white-knuckled on my own. Already, I was facing every kind of bump in life without Michael. Too much had been lost to me already. I was not willing to lose Maine, too.

Maine was where I'd first learned to kayak and canoe and climb a mountain. But mostly it's where I love love love to swim. It's where waves cradle me, blue mountains encircle me and ospreys wheel high in the sky over my head.

And then there are the loons.

Yes, loons. You might know these curious water birds for their haunting hoots and klutzy landings. Loons may have been land creatures before they were sea creatures, some scientists opine. With webbed feet located too far back to balance them out properly, loons tend to do a lot of wobbling and skidding around.

My first summer without Michael, I was doing a lot of wobbling and skidding around as well.  So when a loon that had been swimming underwater suddenly popped up at my elbow one morning, we seemed like a match. The way the loon paddled around me, companionably near, made me feel that the lake was big enough for both of us.

Swimming with the loons helped me feel part of something bigger than just my broken self.

At such close range, I was able to admire the loon's ruby-red eyes. Such an otherworldly glow in those eyes, as if lit with candlepower from within.  And its feathery tuxedo was a work of Deco art. All that black-and-white elegance put my crinkly blue swimsuit to shame.

Another day, a loon family of three sailed past me, as proudly as if on parade. I saw that their fuzzy little chick was riding high and dry atop one parent's back. Family travel at its very best.

Here was the serenity I'd been missing in the corrosive waters back at the midtown Y. Here was nature, soft and soothing, pulling me back into life. Swimming with the loons helped me feel part of something bigger than just my broken self.

But nature has its downsides too, as I learned during subsequent summers.

One night, when I was again alone in the family cabin, a bat flew in, followed me from room to room and refused to leave. "Okay, you've got the place for the night, but you'd better be gone by morning!" I warned the bat, before carrying a pillow and some blankets out to the car.

Ahead of me, a back-breaking evening. But by the time the sun came up, the bat had done the right thing and cleared out for good.

Another night, when I swung open the back door to take out the garbage, I found a coyote waiting for me. It was smaller than I'd expected, with a sharp little face and a plume of a tail. We locked eyes and then before I could gasp or panic, the coyote and its fabulous tail had flounced back into the woods.

Peace can be hard to come by when you lose someone you simply can't lose. That's why I'm always seeking serenity from my summer stays in Maine. I'm a grandmama of three now, and still working on finding my peace. Still yearning to feel part of something bigger than only myself.

At least by now I've been around long enough to know what I need. To be cradled by waves. To be encircled by mountains. To swim with a loon at my elbow, look into its ruby-red eyes and say, "Good morning!" 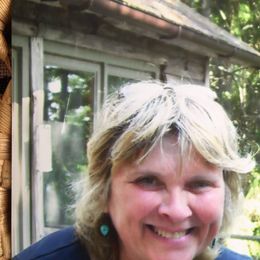 
Susan Lapinski is a writer and the former editor of Sesame Street Parents and Working Mother magazines. This essay is part of a collection of interconnected stories she is writing about her favorite lake in Maine. Read More
Advertisement