The Groundbreaking Work of Intersex Activists in New Mexico

In an interview, Albuquerque activist Georgiann Davis speaks out on the importance of ongoing education about the intersex community, both locally and globally

On March 31, 2022, Secretary of State Anthony Blinken announced in a press statement that beginning on April 11, U.S. citizens would be able to choose an X gender marker on their passports:

"The Department is setting a precedent as the first federal government agency to offer the X gender marker on an identity document. When we announced in June that we had begun this work, we referred to the addition of a third gender marker for non-binary, intersex, and gender non-conforming individuals."

The significance of announcing this landmark development on Trans Day of Visibility was not lost on the LGBTQIA2S+ (Lesbian, Gay, Bisexual, Transgender, Questioning, Intersex, Asexual and Two Spirit) community, widely welcomed by transgender, nonbinary and other gender nonconforming individuals.

However, what Blinken's press release failed to mention, as did the majority of major U.S. media coverage, was that the appearance of the X gender marker resulted from a six-year legal battle fought by a U.S. veteran who is also a member of the community represented by the I in our community's sprawling acronym: intersex.

Dana Zzym, associate director of Intersex Campaign for Equality (IC4E), became the first U.S. citizen to be issued a passport bearing the X gender marker.  In the lawsuit Zzym v. Blinken (formerly Zzyym v. Pompeo, Zzyym v. Tillerson, and Zzyym v. Kerry), a federal court granted Lambda Legal's motion to reopen the case on June 27, 2017 and ultimately ruled that the State Department cannot legally deny an intersex Navy veteran, who identifies as neither male nor female, a passport with the appropriate gender marker.

Zzym discovered their intersex status, which had been hidden from them by their parents, in the process of researching a series of invasive, painful genital surgeries carried out on them throughout childhood and young adulthood. Simply defined, an intersex individual is one whose chromosomes, hormones, external physical characteristics, internal characteristics, or any combination of the above, do not fit the perceived XX/XY biological sex binary.

In addition, their gender identity may not fit the female/male gender binary, which has been erroneously tied to the biological sex binary, either. Zzym uses gender neutral pronouns, they/them/their — and, as another nonbinary member of the intersex community here in the Southwest, so do I.

When intersex issues appear in the media, they almost always appear as part of the ongoing debate surrounding damaging surgeries on intersex infants, which are usually carried out at the behest of terrified, under-informed parents under pressure from medical professionals to ensure that their children will conform to the traditional binaries.

As Zzym can attest, those surgeries are rarely successful, leaving intersex children confused, alienated from their own bodies, and facing a lifetime of chronic pain and other health issues as a result of those surgeries.

Struggles Faced by the Intersex Community

However, intersex variations (often called intersex conditions or Disorders of Sex Development, both of which are pathologizing and not widely accepted in the community) are not solely a childhood concern. Intersex people often disappear into adulthood, hiding for fear of further rejection or, even worse, violence. Unsurprisingly, struggles faced by the intersex community overlap with those faced by the transgender community. They are often one and the same given that a high percentage of intersex individuals also identify as trans.

In the Southwest, the LGBTQIA2S+ community is as hyper-focused on queer youth as it is in many of the more populous urban centers of the U.S. Queer middle-aged and older individuals frequently fall by the wayside and have difficulty finding community and accessing services, especially those from BIPOC backgrounds.

Zzym is a resident of Colorado, one of the states in our region with a proliferation of queer-supporting organizations. By contrast, my home city, Albuquerque, is home to the Transgender Resource Center of New Mexico, the only center of its kind in my state that is not attached to a university or other institution.

In recent years, New Mexico has become home to an increasingly visible adult intersex community.  I arrived in New Mexico during the summer of 2016, the same year IC4E Founder and Executive Director Hida Viloria relocated here — with whom I had the privilege of editing an online journal issue we titled Intersex Quarterly.

Several years later, intersex activist and scholar Georgiann Davis accepted a position in the Sociology Department at University of New Mexico, which is where I teach in the English Department while pursuing a PhD in Rhetoric and Writing. Still, much of New Mexico's intersex community is closeted, whether out of preference or necessity. This is especially understandable in those from Hispanic, Latinx, and Native communities.

Viloria and Davis each have a long history of groundbreaking activism, often overlapping with each other in documentaries, speaking out against surgeries on intersex infants, and in support of legal battles like Zzym's.

Having been on panels locally with both of them, for audiences both lay and medical, I look up to Viloria and Davis as elders in our subset of the queer community.

Davis was available for a brief interview and kind enough to answer the following questions:

AJ Odasso: What have you found the most rewarding about life as an intersex person in the Southwest? The most challenging?

Georgiann Davis: I relocated to Albuquerque about a year ago for work. And while navigating the pandemic with a toddler has had its challenges, I've managed to find pockets of queer folks and allies in and around the area to help make my new area feel like home as an intersex person and newish parent. The most rewarding part about being an out intersex person in Albuquerque is filtered through the comfort I feel knowing other intersex activists have been in the general area far longer than me doing the work that benefits all of us regardless of our bodies. I'm not alone in Albuquerque.

The most challenging part about being intersex in Albuquerque is not necessarily unique to the Southwest but has to do with health care providers' ignorance about intersex issues and their reluctance and stubbornness to learn and grow from the lived experiences of intersex people. It's also quite frustrating navigating flawed anti-queer assumptions about family formations on state issued forms like birth certificates — my child was born in Nevada where an option for 'Parent 1' and 'Parent 2' was available rather than 'Mother' and 'Father.'

"I think it's important to note that victories happen every day and take on different forms."

How has moving to this region changed the scope of your activism within and outside the queer community, if at all?

I see intersex activism as a global effort with lots of folks devoting their time and energy to making the world a better place for all of us. Being in Albuquerque hasn't changed my activist efforts, but it has reminded me of the importance and value of cross movement collaborations with other minoritized communities given our overlapping goals and the fact that struggles are not bound by our locations.

What are the most significant victories you've seen for the intersex and trans communities in your lifetime?

I think it's important to note that victories happen every day and take on different forms. I could be educating one's neighbor about the existence of intersex people and flawed assumptions that sex is a binary phenomenon. Or a victory could come in the form of an invitation to speak to a local elementary school community about sex and gender diversity. These small steps that don't make national news are incredibly important victories in my mind.

With that said, if you would have told me a decade ago that I'd witness the dismantling of the sex/gender binary on U.S. passports, I wouldn't believe you. But the organization Intersex Campaign for Equality and its leaders, notably Hida Viloria and Dana Zzyym, didn't give up and their win is a victory for all of us. I will forever be indebted to them.

New Mexico has the opportunity to be a leader on intersex issues and they can do so by prohibiting cosmetic surgeries until the person, themselves, is mature enough to be involved in the decision-making process. If someone wants a cosmetic surgery of any kind, that is a choice they should have available to them and not one that is enforced onto their bodies because of flawed assumptions about normalcy. 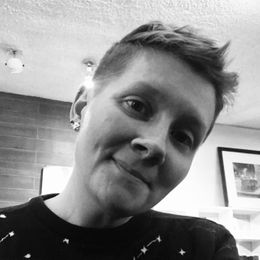 AJ Odasso's first full-length poetry collection, "The Sting of It," was published by Tolsun Books in 2019 and won Best LGBT Book in the New Mexico/Arizona Book Awards.  Their first novel, "The Pursued and the Pursuing," was published by DartFrog Blue in 2021 and won second place in the Adult Historical Fiction category of the Reads Rainbow Awards.  AJ holds an MFA in Creative Writing from Boston University and teaches at Central New Mexico Community College, San Juan College, and University of New Mexico.  They have also served as Senior Poetry Editor at Strange Horizons magazine since 2012.  You can find them on Twitter @ajodasso. Read More
Advertisement