The Missing Heart of My Childhood

While my parents didn't show love easily, I grew to understand how they cared

I live across the street from L O V E.

The letters are 4' tall and adorn the brick facade of the American Visionary Art Museum in downtown Baltimore. The "L," "V" and "E" are fluorescent blue; the "O" is a red heart.

In daylight, the letters fade into the building, causing me to forget that they are there. I look right past them to the activity on Federal Hill, the iconic park that surrounds the museum. Runners stretching their calves, dog owners clutching plastic bags as they wait for their pooches to sniff out the perfect spot. Children rolling down from the top of the hill to the sidewalk, shrieking with a fear that turns into laughter. On weekends, brides and grooms pose for pictures under the letters as if to label their feelings.

At night, as I sit in my rocking chair peering over the balcony, the hill recedes from view and the letters come to life. When the Realtor showed my husband and me this unit, she said, "Come out here and look. This is my favorite part — you can live in the light of love."

And most of the time I do.

Other times those letters mock me.

When I am present, in the moment, I bask in the love of my husband, children, grandchildren, extended family and friends. It fills me up — I am humbled and grateful.

My father almost said, "I love you," to me once. It was when I was a teenager and he was recovering from heart surgery.

However, there are times that I drift to the past, jarred by jagged remnants of the long-ago pain of a fat, acne-faced child craving affirmation that she is lovable. In those instants, I feel like that heart-shaped "O" is missing.

My father almost said, "I love you," to me once. It was when I was a teenager and he was recovering from heart surgery. The doctors had told us, "The next twenty-four hours are critical. Go home and pray that he makes it through the night."

My overwrought mother took a sleeping pill to quell her anxiety. I paced. From the pink princess phone in my bedroom, I called the charge nurse every few hours for reassurance that my father was still alive.

Devising Explanations About My Dad

When the sun finally rose, we hurried to the hospital and I tiptoed into my father's room. His eyes were closed, and he looked like a ghost encased in a web of tubing. I stood at his bedside and cried. He must have sensed I was there because he opened his eyes, looked into mine and whispered, "I should have showed you that I loved you."

Dad made a full recovery, but retreated to his pre-heart attack ways. I had hoped that, given a second chance, he'd treat me like my best friend's father who called her "my angel," like the TV fathers who snuggled with their daughters.

I yearned for a kiss on my cheek, on my forehead. A squeeze that was so tight, it crumbled my doubts of his love.

When I tried to hug him, his arms hung by his side or rested awkwardly on my back. And he never used terms of tenderness except for an occasional, "Hi, dear." Nor did he offer the words to explain why he didn't.

So, I devised my own explanations. He was from the tough-love generation. He was disappointed that I was overweight and not beautiful like my mother and sister. If he treasured me, the way I was, I'd have no incentive to change — and I'd never find a husband.

No Affection From My Mother

My mother, on the other hand, was not one to control by withholding. The reason she never hugged or kissed me was because she was a germaphobe. And she never made up for her tactile deprivation with endearments because she couldn't give me what she'd never gotten. She'd had a rough childhood, an absent father, an anxious and overworked mother. Whatever nurturing she'd received, she hoarded for herself.

Even when she wilted into a shell after my father's death, when I tried to kiss her cheek, she'd turn her head away, bring her fingers to her lips and blow me air kisses.

When my mother lay dying in a senior living facility, there were no parting gifts of affection. A hospice nurse administered morphine, as I brushed stray hairs from her forehead. I took my mother's hand in mine and said, "It's okay. You can go. Go to Daddy." I waited a few seconds, summoned my courage, took a deep breath, and added, "I love you."

Silence. Not a nod, nor a squeeze of my hand.

Yet I was not ready to give up. I longed to climb into my mother's bed, lay her head in the crook of my arm, turn onto my side and cradle her until she was gone.

But I couldn't. I did not know how to give her that kind of love.

Instead, I stood at the side of her bed, my arms heavy with guilt, and watched as my mother took her final breath.

Wisdom Allowed Me to See Clearly

My parents' lack of affection did not break me — but it did leave cracks. For a while, I scrounged about for remnants of love, and settled for attention. Whether from my diving partner at summer camp or a long-haired friend who lived across the hall in college, I hoarded any gestures that made me feel worthy.

I married, at 23, in an ill-fated effort to fill an emptiness that had metastasized. The marriage lasted 15 years, enough time to give birth to three children and an all-consuming, precious kind of love that I would never hesitate to express.

As the years between my childhood and adulthood mounted, wisdom worked like lidocaine — it numbed my pain and freed me to see clearly. I began to understand how my parents showed their love.

They showed their feelings in other ways, by deeds of kindness.

I thought back to when I was 16 years old. I had worked odd jobs to save enough money to buy my first car — a rusty jalopy. The engine died after only two weeks and I was heartbroken. A few days later when the bus dropped me off from school, a brand-new, midnight-blue Camaro waited for me in the driveway, along with an extended warranty.

I also remembered the time my parents threw me a surprise law school graduation party. My father beamed when he stood up for a toast, saying, "Every parent should feel the naches (Yiddish for pride) we feel today. We are so proud of our daughter." (My love for them kept me from disclosing that the party was not a surprise.)

I recalled the times I was sick with minor colds or viruses. My parents would check in with me every few hours asking, "Are you feeling any better?"  Even as an adult, when I had a root canal and couldn't answer the phone, my new husband promised them, "I'll call you, if there's any cause for worry."

I spent my childhood and much of the ensuing years yearning for a love that made me feel safe, adored. For whatever reasons, my parents could not give me that intimate, demonstrative kind of affection. They showed their feelings in other ways, by deeds of kindness.

Like the sign on the museum in daylight, their love was always there, but I had looked past it. And although it was not all that I needed, it was all that they had to give.

Last night, when it stopped raining, my husband and I went out on our balcony. I pressed my palm to the cushions to see if they were wet. I nodded to indicate they were okay, and he reached for my hand. 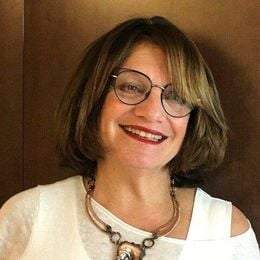