In the year before COVID, during the rainy winter season when I had been in my apartment wearing sweatpants and a frayed sweater for way too many days, my restless web browsing introduced me to the world of international home exchange. I eagerly posted my apartment and responded to an offering for a three-bedroom stone farmhouse in the south of France for a month in July with an immediate and enthusiastic yes. I invited two of my closest women friends to join me. They delightedly agreed and the stage was set!

A friend introduced me to the website Wirecutter, a carefully curated resource for everything a traveler might ever need and everything they had no idea they ever would — but might. So, onto the site I went.

Hand sanitizer. Wet wipes. Eye drops. Sleep mask. Noise cancelling headphones. Packing cubes. I was not an inexperienced traveler, and disinfecting wipes and eye drops were not high on my list when I was fifty. I just got on the plane, hoisted my bag into the overhead and settled into my seat. Clearly a twelve-hour flight was going to require more amenities.

Soon packages began to arrive with increasing regularity. Compression stockings. Travel backpacks (important to keep hands free, they advise), passport wallets. What if my bag got lost? Pack a change of clothes in my hands-free backpack. I hadn't yet even begun to read the travel books so I could learn about where I was going because I was still outfitting myself to get there.

I was not an inexperienced traveler, and disinfecting wipes and eye drops were not high on my list when I was fifty.

I have a pickpocket-proof backpack with compartments for everything; waterproof hiking boots that only came in a neon color in my size (enormous, requiring men's shoes) so I look as though I have two sparkling clubfeet and knew I would never ever under any circumstances wear them anywhere but in the privacy of France; travel insurance because, after all, I'm old and who knows what could happen to me; and a car rental.

Now my budget for the next six months is shot. This has become the most expensive free vacation I've ever had. But still …. If everything works out, if my friends can come, it will all be worth it.

A Change of Plans

Real life always interrupts everything. Both of my friends have been medically advised not to travel. Be flexible, I advise myself, advice I had been unsuccessfully giving myself all my life. While I feel timid about being alone in a medieval village farmhouse, I know that if I create a reason not to go, even a good one, I'll be terribly disappointed in myself for the rest of my life. And not wanting to have a future defined by disappointment, I go.

The compression stockings last less than an hour, my legs angrily rebelling against the experience of being girdled. The eye drops roll under my seat never to be retrieved. I use one sanitizing cloth to wipe down the tray in front of me and the rest are abandoned in my seat pocket.

Be flexible, I advise myself, advice I had been unsuccessfully giving myself all my life.

My burglar-proof backpack turns out to be impossible to open without placing it on a flat surface and completely unzipping it, which makes it nearly unusable. My cross-body bag with all the sections (and little locks for each) is confusing since I never remember which item is in which compartment and I spend too much time opening and closing locks and zippers instead of doing what feels most natural: sticking my hand into a large pouch and rooting around for what I need.

Eventually arriving in Toulouse, I pick up the car and promptly set up both its navigation system, my phone's Google maps and the additionally rented GPS just in case both the car and phone systems crashed, trusting that at least one should get me to where I needed to go. I drove to the accompaniment of a cacophony of robotic voices all talking at once, flashing maps and pointing arrows, resulting in an electronic confusion. Two tense hours later, I exhaustedly arrive at the small twelfth century village and a gloriously cool stone farmhouse in the middle of town

The French Begin with Hello

When, as a much younger woman, I first traveled to France, I approached the counterman in the coffee shop near my hotel and proudly intoned, "un cappuccino, s'il vous plait." There was a long pause which he pointedly filled by saying, "Bonjour, madame." Oops, I thought. The French begin with hello. I am rude and have just become an ugly American. Always begin with Bonjour. That lesson firmly in place, I have always been careful to begin with a warm hello whenever I go into a shop or speak to a salesperson.

Remembering my good manners, but forgetting the right word, I enthusiastically bellowed "Aujourd'hui!" (which means "today") to the startled shopkeeper.

I entered the local patisserie the next morning, nervously rehearsing all the words I would need to purchase a baguette, milk, a vegetable quiche and a lemon tart. Remembering my good manners, but forgetting the right word, I enthusiastically bellowed "Aujourd'hui!"(which means "today") to the startled shopkeeper. I kept talking even after recognizing my mistake given that she was the gatekeeper to the food I intended to eat that day, but I painstakingly bonjoured my way through the rest of my stay.

Each morning, I awakened at 6 am, before the sun was high in the sky. Filling my thermos with iced coffee, I set out through the sleeping streets, carefully placing my sneakered American feet on the uneven cobblestones, moving alongside the graceful abbey to a path winding down to the river that ran behind the village.

By the end of the first week, I had defined the contours of my constitutional into the vineyards on a well-marked path past some working farms, leading up an incline to a paved road which circled around the back of the village and returned me to the abbey, across another narrow bridge and onto a paved path to the patisserie where I purchased my morning pain aux raisins. After saying Bonjour. This began the day, and a rum raisin ice cream cone at the riverside café concluded it.

One morning I came upon the Saturday market held in the local square and filled with food stalls, artists' displays and colorful women's clothing hanging from tall poles. Buzzing around all the offerings were French women, all appearing to be cool, charmingly dressed, speaking with rapidity to one another and the vendors. Hastily wiping away the rivulets of sweat making their way down my face and falling off my chin, I feigned interest in the displays, feeling like Gulliver on his travels.

Having been six feet tall once upon a much younger time, I was still many inches above everyone there and as the memories of a gangling adolescence settled over me, I arranged my face in what I hoped was a maturely calm expression and briskly moved past all the booths as if I had somewhere important to be.

Stopping in the patisserie for something comforting, something that would briefly allow me to feel like an ordinary-sized person, I stood in a long line for my morning pastry as people chatted too fast for me to understand anything but their remarkable inability to feel the heat.

I drank the silence in, filled myself up with it, which turned out to be the biggest surprise of all.

Later that afternoon, I walked down to the river where families were delightedly splashing in the cool water. My intention was to glide to its edge, effortlessly unfold myself onto the ground, and read, imagining myself in a painting by somebody who painted old women lounging along the banks of a river.

But as I grew closer, I realized that the water was gently lapping against rocks upon which there was no way I could gracefully unfold. I sat down on a piece of stone that hit my behind in an unseemly way and tried to look comfortable, eventually sliding closer to the ground until I was, as I had originally intended, sitting on the shore. The rocky shore.

After an appropriate interval during which, if anyone were watching, I might have been reading, I carefully moved to all fours and pushed down, which is how I get up now. Straightening, I didn't look around to see if anyone had witnessed my unceremonial rise and for the rest of my stay, enjoyed the river from afar.

I briefly considered trying to be productive, returning home with the rough draft of a manuscript resting smugly in my computer. Or finally getting to all the first-generation immigrant experience novels I have been meaning to read or visit the abbey and educate myself about their history of this landscape. All of that was possible, but I didn't want to do any of them.

I have had what I called my 'bathrobe' days at home when I did nothing but eat popcorn, read a novel, watch some television, look out the window, and maybe after many hours complete a minimal task like a load of laundry or running the dishwasher. But I have never had two days in a row of 'bathrobe.' Now I have weeks.

I drank the silence in, filled myself up with it, which turned out to be the biggest surprise of all. I had never imagined my lifelong need for and pleasure in connection, thoughtful conversation and intellectual stimulation would fall away so easily. But it did. Just me with me. Not by myself. With myself.

Before I embarked on this solitary adventure, I sensed I would return home knowing things about myself that I didn't know when I left. And I have. I've been surprised by the ease with which I sank into the rhythms and beauty of the natural world and small village life — two realities about which I know very little. I can't tell the difference between a chestnut and a maple tree. And villages are places my grandparents fled.

Another set of possibilities opened to me. Ones where I didn't need or want anything more than what was before me, the quiet a balm and a comfort. Perhaps I no longer need to protect myself against a childhood where the silence that saturated our home bristled with angry and dangerous possibility.

Perhaps I don't have to fill every pause in conversation with carefully chosen words. Or be the woman I so needed then. Perhaps I no longer have to be smart or interesting, engaged or responsive, ask the most penetrating question or always consider how to be helpful. Perhaps, at 82, I am, just a little bit, free. 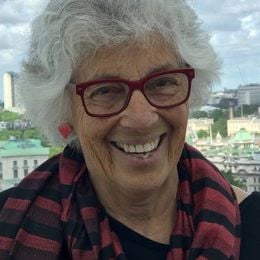 Sandra Butler Sandra Butler doesn’t identify as a senior citizen, as elderly or even as mature. She is unequivocally old. This excerpt from "The Kitchen is Closed: And Other Benefits of Being Old" addresses both the inevitable limitations that aging brings as well as her delight in the freedom that oldness confers, at least the freedom not to care about so many of the things that once seemed so important. Read More
Advertisement