Walking While Blind in Manhattan During the Pandemic

Quieter streets are actually making life harder for people like me

It's been my morning routine in New York City for at least 10 years: I fasten the leash and harness to my yellow-lab guide dog Inga and head to Silver Moon Bakery, a three-block walk, to pick up a cup of coffee and something tasty. But there's nothing routine about walking while blind, at 66, on the streets of New York City these days, due to the pandemic.

Crowded sidewalks and roadways have a few benefits to the blind: motion provides clues to what is happening.  Before the pandemic, when I approached a corner, I could hear whether other pedestrians were walking in the same direction, stopping, slowing or hurrying. I could hear cars traveling in the same direction and zooming past me on a parallel track  through the intersection. I could hear other cars idling  perpendicular to me, waiting for a light to change, or driving directly in front of me. These were all signals that it was okay to cross — or not.

I soon realized that even with loosened rules, the quiet of COVID-19 was magnifying some already difficult situations.

But even these aural signals required pausing to listen for anomalous counterindications from vehicles or foot sounds that may have been masked by other sounds, or could occur as a slight shift in energy, vibrations — what Luke Skywalker might call disturbances in the Force.

A dramatic change in the atmosphere and rhythms of New York began, however, when we entered lockdown from mid-March to early April last year.  The normal commotion ceased as the streets went silent, stripped of most pedestrians and vehicles. That's problematic for me, I discovered.

When the Pandemic Lockdown Began

The first morning of the lockdown, Silver Moon stopped letting anyone in without a mask and not allowing more than two customers to enter at a time. I was wearing my mask and feeling pretty funny about it, but another patron whirled around and snarled at me for disobeying the newly posted sign about the two-person rule. I pointed to Inga's harness and received a grumbled apology.

This was the first of many sharp receptions we were to find because we either hadn't seen a sign or noticed people lined up and waiting outside a store with suddenly restricted entry for rationed social distancing.

As the hard lockdown ended in April, the abrupt, unnatural quiet of Manhattan streets began to revert gradually closer to its natural state of constant motion. As people began first to venture out beyond the pharmacy or grocery (or bakery), I knew something had shifted when four people I know stopped me to say hello within a six-block radius of my home.

I was pleased to be seen — but  anxious, too. I could neither tell whether someone was masked nor how close we were.  I was at a disadvantage.

How COVID-19 Has Magnified Difficult Situations

I soon realized that even with loosened rules, the quiet of COVID-19 was magnifying some already difficult situations.

For instance, it's been harder to detect approaching vehicles. Internal combustion engines aren't as loud as they once were. And the paucity of cars, cabs, trucks and buses, in tandem with hybrid and electric vehicles that are virtually silent, means it's often impossible to recognize that one of these stealth vehicles is nearing as I cross the street.

Just like getting lost in a whiteout steps from your front door, my pandemic traffic problem can happen close to home if I let my guard down.

Once during the quietest part of the lockdown, with no vehicles detectable in any direction and no pedestrians to track, I decided to dash across West 107 Street, a block from home. I commanded Inga to go forward, and she took several steps before halting suddenly. Thankfully, I was paying attention to her, stopped and caught a glint of sunlight off of a car's surface and the breeze as it rushed past. I finished crossing the street and stood still, stunned at my narrow miss. Inga, of course, got a treat.

With activity at a fraction of its normal volume, I've had to be particularly attuned to what remained. Sometimes, it seemed, this was at a molecular level.

That first night of lockdown, when I took Inga out for her final bathroom break at 10 pm, I found myself in what felt like a vast cornfield in Iowa — there were no cars, no store lights and no people except for the man who seemed to appear from nowhere, asking for change. The scene repeated itself the next night, with a different panhandler.

There has also been an ominous, opposite problem: emboldened by the relative lack of traffic, impromptu and often large packs of motorcycle dudes took to the streets all summer. They raced up and down Broadway at high speeds and higher decibels, drowning out all other noise and making it impossible to tell whether a person, bicycle, car, bus or truck was also approaching.

Then there's the crosswalk challenge.

By the time we got home, I was shaking and sweaty with anxiety about all the people who'd been hanging out along the way.

A few years ago, the city began installing what are known as LPIs, or Leading Pedestrian Intervals — visual signals telling sighted pedestrians they have the right of way and several seconds to begin crossing a street before the traffic light changes to tell vehicles they can move. In other words, sighted walkers were getting more seconds to cross. Those of us who couldn't see the LPIs didn't have that luxury.

What New York City was not installing as fast were APS systems — Accessible Pedestrian Signals. These are the beeping tones emitted at intersections that change pitch, rate or both to let blind folks know it's okay to cross.

Before the pandemic, I began noticing a change in the familiar crossing rhythm at some four-way intersections: cars were neither crossing in front of me nor moving parallel to me. Traffic was stopped in both directions, and nothing would move for what seemed an unusual length of time. I might hear people crossing but had no way of knowing if these were daredevils rushing to beat a changing light or more restrained folk following visual guidance. I had to guess  whether the traffic would start in front of me (Don't Walk) or next to me (Walk). I really didn't know what was happening, just that it was confusing and unnerving.

With the pandemic, vehicular and pedestrian noise patterns have shifted, adding confusion to the signals mix: The long wait for a safe crossing got even longer during the quieter months of COVID-19. It became infuriating not to know whether the silence meant it was safe to cross or that hybrid or electric vehicles were swooshing by undetected.

I've often found myself tempted to take a risk. But even the city's hybrid bus fleet can bear down silently, and a bus did just that one afternoon as I stepped off the curb. Again, I was fortunate to have Inga by my side.

Why don't I stay home? I mostly do, except I have errands, from grocery shopping to picking up medication. Inga needs to walk, too, and we sometimes use less traveled streets. That can turn into trouble.

The first time we did this, in May, was a big mistake. By the time we got home, I was shaking and sweaty with anxiety about all the people who'd been hanging out along the way. I had no idea who was masked and who wasn't. Several people bumped into me, sometimes shouting an apology — or blame — directly in my face from close quarters. Not comfortable.

Now, ten months on, my neighborhood is once again thrumming with a semblance of life. Despite the cold, outdoor tables at nearby restaurants are filled most evenings. I'm happy for the struggling owners and their employees, and pleased the city has relaxed restrictions, so some places can remain in business. Yet the haphazard way the tables and chairs are set up has created a new problem for Inga and me: an obstacle course.

And it's not just these inanimate pieces of furniture. People stand and schmooze, wait for a table to open up, laugh and talk loudly, sending invisible droplets through space and perhaps into my mask.

One night, walking along a block with several restaurants that previously had had no outdoor tables, Inga tried to find her way. Someone started yelling at me to "Get out of here!" I didn't even know where "here" was.

A stranger noticed our predicament, came over and explained to the diner that I was blind, that Inga was my guide dog and that we were trying to get through a tight space with no truly discernable path. The diner continued complaining, and the stranger offered his arm to me. I took it, and he guided us through this maze  and the next one before we could be  on our way.

Our Commitment to Covering the Coronavirus

We are committed to reliable reporting on the risks of the coronavirus and steps you can take to benefit you, your loved ones and others in your community.
Read Next Avenue's Coronavirus Coverage

I'd been so taken aback by the diner's outburst, which alerted me that something was wrong without giving me time to figure out what, that I hadn't responded to him.

The many changes the pandemic has brought to my streetscape interactions as a blind pedestrian are relatively minimal on their own. But one by one, they accumulate and multiply, so the already enervating, intense challenges of navigating safely have come together to heighten my sense of vulnerability all along my way.

How I'm Modifying My Behavior

Like nearly everyone these days, I am modifying my behavior and working harder than ever to stay safe.

The constant threat of contagion has thrown the dangers of life in the city for a blind person into sharp relief; I have always been aware of them, but my reactions are more visceral now, and my actions more deliberate.

The urge to flee to a gentler place is strong, but it is counterbalanced by my determination to keep learning what I can and the awareness that someplace else will just try me in different ways that are no easier to resolve.

The accumulated weight of a daily routine of risk sometimes presses down hard enough to keep me home even when I need to head out. Yet the knowledge that this reaction will only feed on itself and hem me in further… it inevitably leads me to the door and out to the street. 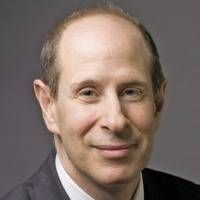 Peter Slatin is the founder and president of Slatin Group, a New York City-based firm that provides education and training to the hospitality and tourism industry on service to people with disabilities. He is also an award-winning journalist and a 2020-2021 Encore.org Public Voices Fellow. Read More
Advertisement