Reflections on the Plague Year From an Anti-Ageism Activist

The pandemic didn't make ageism worse, it exposed what's been there all along

Something awful has happened. I remember that being my first, groggy, early-morning thought several times in my life (not counting after tragic breakups): after JFK was shot; when 9/11 happened; and during the spring of 2020, as a novel coronavirus spread across the Earth.

Well into last summer, waking up felt like echo-locating, the way bats do, in an unfamiliar space. Professionally, it felt like being picked up by the scruff of the neck and compelled to think bigger and be braver.

Periods of intense change reveal the systems that shape our lives. We suddenly see what's working and what isn't; what's not important anymore and what really matters. As an anti-ageism advocate, I'd say that one thing the pandemic did was bring attitudes towards age and aging out of the corners, right into the middle of the room — a welcome change.

Tapping into the Black Lives Matters movement's focus on systemic racism, the shift in the zeitgeist has made it much harder for an ageist and ableist (one that devalues older and/or disabled people) society to continue to look the other way. The pandemic didn't make ageism worse, it exposed what's been all around us all along.

The Reaction Against Ageism in the Pandemic

Yes, there's been age-related awfulness during COVID-19, but there's also been swift, fierce pushback: against The Telegraph journalist who suggested the coronavirus could benefit the economy by "culling" older Britons; against the hideous "Boomer Remover" nickname (a short-lived handiwork of clueless trolls) and against the Texas Lieutenant Governor's grotesque proposal that grandparents sacrifice themselves for the good of the economy.

As the year progressed, age became central to far more conversations than ever, both public and private, many about equity and access. There was zero backlash when the first COVID-19 vaccination priority group included nursing home residents and people over 75. That's a low bar, admittedly, but welcome nonetheless, especially in view of the fact that when he was President-Elect, Joe Biden's COVID-19 advisory team contained the author of an Atlantic cover story called "Why I Hope to Die at 75"  (University of Pennsylvania's Dr. Ezekiel Emanuel) and not one geriatrician.

An appalling number of older Americans have died in the pandemic. To date, 93% percent of COVID-19 deaths have been of people age 55 and up.

The Past and Future of Nursing Homes

More than a third of COVID-19-related deaths have been linked to nursing homes (both residents and staff), even though less than 0.5% of the U.S. population lives in them.

Many of these deaths were preventable, and COVID-19 infection and death rates remain staggeringly high.

Both ageism and ableism sanctioned the abandonment of people in nursing homes and gave cover to decades of neglect of long-term care policy. That cover is finally wearing thin. Because much of our fear about aging is actually about encountering physical or cognitive impairment, being anti-ageist means being anti-ableist.

Just as we can't dismantle ageism without dismantling ableism, being anti-ageist means being anti-racist.

The nursing home industry is now under harsh scrutiny, thankfully, and reform has begun to receive significant attention at the national and state levels.

In all age categories, Black, Latinx Americans and Indigenous Americans continue to die of COVID-19 at much higher rates than white people. Youth confers some protection from the virus; that's biology, not bias. Being white should not.

The risk factor here isn't race. It's racism: the cumulative effect of living in marginalized, economically disadvantaged communities with reduced access to health care. The oldest members of these communities remain at the highest risk of all.

Just as we can't dismantle ageism without dismantling ableism, being anti-ageist means being anti-racist. All these systems of oppression feed and depend on each other. The good news is that activism is intersectional too: when we confront any form of prejudice, we chip away at the fear and ignorance that underlie them all.

Despite these horrors and inequities, the pandemic has delivered scraps of grace.

Behaviors that would once have seemed rude or weird — wearing face masks, maintaining distance, stepping out of a fellow pedestrian's path — make visible our concern for each other. I find that moving.

More of us now understand social isolation better, and with more empathy. People have mastered new technologies enabling them to stay connected. Geography has divided us less.

Not Invulnerable, But Less Vulnerable

Accommodations that let employees work remotely, which people with disabilities had requested for decades, magically became possible once the health of the general public was a risk. It's up to all of us to make these accommodations permanent, and to close the digital divide —another way unhoused and low-income populations are bearing the brunt of the pandemic.

It was gulp-inducing for me, at 68, to acknowledge that I was Officially Vulnerable. It was a relief to get vaccinated and become Officially A Lot Less Vulnerable — Less Vulnerable than some Young People Even! — for a brief, socially-engineered window of time.

If there's one thing the past year has proved, it's that everyone, everywhere is in this together. Let's rise to this historic opportunity to join forces across age, race and class and create a more equitable post-pandemic world. 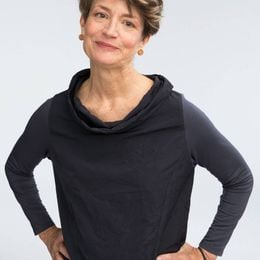