How A Spouse's Physical Disability Impacts A Relationship

An injury to one partner has many ramifications for the couple. The key to working through the challenges is communication.

Despite his precarious balance, Linda's husband refuses to use his walker or even the non-skid rugs in the bathroom. Instead, he pushes his feet on a towel along the wet tiles. Her 87-year-old husband of 50 years insists he's fine even though in the past, she says, he has confessed, "'I can't acknowledge this is where I am in my life'."

Linda, a 74-year old mental-health clinician in the Washington, D.C., metro area knows she's being "bitchy." She says: "I'm past the stage of 'I know this is hard.' Now it's: 'You fall and you're dead!'"

Conflicts like these are the most obvious sign of an intimate relationship battered by the emotions swirling around a partner's physical disability, including fear of dependency, loss of identity and a potentially diminished relationship. The magnitude of what these older couples face challenges even the most loving couples.

New research finds that those who can regard the disability as shared do best, both physically and emotionally. After all, while one partner's injured hip affects his ability to walk, the disability happens to their relationship. It may alter their respective roles and responsibilities, their social life, shared activities and their sexual intimacy.

When partners see the disability as shared, they develop a sense of we-ness around it, and that strengthens their couple bond.

A new couples-oriented therapeutic approach shifts the focus from a caregiver/care recipient model to treating the pair primarily as a romantic couple.

Whatever the physiological issue, working on that relationship is key, says Zurich University psychologist Isabella Bertschi, lead author of a recent review of over 30 studies of couples across a range of infirmities. When partners see the disability as shared, she says, they develop a sense of we-ness around it, and that strengthens their couple bond.

The path to we-ness lies in their expressing their inmost thoughts and feelings to each other. But that's hard.

"It's very intimidating for them to share their fears, their grief and anger," says marriage and family therapist Mary Sanders of Shoreview, Minn. The healthy one may feel guilt and shame because they're not ready to be at this stage of life.

It's also common for the healthier partner to think: "He's going through so much: I don't want to burden him with my feelings."

She thinks she's protecting him, but her withholding stresses them both and pushes them apart. He wonders why she's not being open with him and doubts the strength of their bond, says Bertschi.

"It undermines trust in the relationship," she adds.

'I Could Not Live Without Her'

Patricia Welter, 66, and Robert Welter, 67, illustrate how hard it is to tell each other painful truths —and how essential. When they met in their late forties, she had her Type-1 diabetes under control and had become a Pilates instructor.

A year later, Patricia suffered a crisis: retinal bleeds requiring multiple surgeries; she had a stroke and fell into a coma. When she woke, she was paralyzed on one side and missing sight in her left eye. As she labored to regain movement, Robert threw himself into the role of coach and cheerleader.

Since both were Disney devotees and Florida residents, Robert's challenge to Patricia to run the Disney Half-Marathon with him made sense. After the finish, he proposed in front of Cinderella's castle at the Magic Kingdom.

That's the fairy tale gloss on their story. Patricia did regain movement and resumed teaching Pilates. But she was never physically the same, and is legally blind. The super-active couple who loved scuba diving and mountain climbing can no longer do those things together.

But their loss goes deeper.

"I felt I lost my sexuality and vibrancy," Patricia says. "I hurt for him. I know at times he thinks about what it would have been like if he hadn't partnered with me. He's given up so much, including his work so he can drive me everywhere."

She knows what Robert feels because he's told her. "I had to give up a lot of my freedom," he says, "and at times I felt resentful and asked myself: Why am I wasting my life?"

But he knows the answer. "When I met her, I knew she was the person I wanted to grow old with. I stayed with her because I could not live without her," says Robert.

"No matter where we are," Patricia says, "we can talk." Whatever happens, Robert says, "We remember why we're together to begin with. Her disability didn't change what we have."

Grieve the Loss Separately and Together

Before they can share their emotions so nakedly, couples must grieve their losses, separately and together.

In her new book, "The Myth of Closure: Ambiguous Loss in a Time of Pandemic and Change," Next Avenue 2021 Influencer in Aging Pauline Boss says, "I talk about personal ambiguous loss. You can lose something of value to yourself inside yourself. If a woman loses her vibrancy and sexuality, it is a loss to both her and her partner. She is still there — she did not die — but she is different."

Boss, the pioneering family therapist who created the concept of "ambiguous loss" to describe a loss that's not clear-cut and hard to resolve, notes, "You can't cope with something unless you name it and acknowledge it. Then you can talk about the difficulties and the changes that will have to be made."

With a new infirmity, many people go through all the stages of grief that precede acceptance, including anger and depression, says marriage and family therapist Anabel Basulto at Kaiser Permanente in Orange County, Calif.

"Sometimes I felt that she was stuck with this and with me. But she kept reminding me of the strength of our commitment to each other."

It was that way for Dean and Elizabeth, both about 60 and married 35 years, when a hip replacement gone disastrously wrong robbed Dean of the use of one leg. [The couple asked for their last name and location to remain private.]

"My feelings were all over the place," he says. "This is not how I imagined my life unfolding. I'd been an athlete. I was proud of being physically strong. Sometimes I felt that she was stuck with this and with me. But she kept reminding me of the strength of our commitment to each other."

They grieved separately and together. "Sometimes we'd lie in bed together and just cry," Elizabeth says.

But they could also laugh at the absurdity of their predicament. "Because he could not lift his leg over the bathtub," Elizabeth recalls, "I pushed his wheelchair to the YMCA so he could take a shower. We laughed and laughed."

Adapt to Meet Both Your Needs

Taking on the disability as shared does help couples defuse disagreements about using the cane or hearing aid or whatever device is required. But some couples need help to let go of you must or I won't.

Therapists who work with these older couples, as I explain in my book "Love After 50," help them identify and express to each other the fears, anger and longing resulting from their changed lives.

Here's a typical example: The wife now needs oxygen and a wheelchair to go out. She's been refusing to go out, especially to their local diner, the social center of their town. Once a beauty queen and always glamorously put together, she feels humiliated to be seen this way. She dreads everyone making a fuss and asking solicitously how she's doing.

Her husband is frustrated. He feels cut off from his friends and neighbors, bored and alone. He dismisses her feelings as "vanity."

Their therapist helps him understand her profound sense of diminishment and loss of identity. She, in turn, learns how her withdrawal is hurting him. Their therapist suggests they try eating at an off hour when they won't face crowds. She tolerates this well. Before long, people stop noticing her equipment and they both once again enjoy this cherished part of their life.

What brings a couple together is learning what the other needs, what hurts. Dean, for example, knows how much it means to Elizabeth to attend the State Fair together as they've done all their married lives. So he agrees to have her wheel him though the crowds of merry-makers eating cotton candy and blooming onions.

"I went to the fair in a damn wheelchair, looking at all their belly buttons," Dean says, "I hated it!" But he did it for her.

Elizabeth showers him with appreciation, and he responds with gratitude. "When things feel really hard," she says, "we tell each other: Whatever this is, we're gonna go through it together." 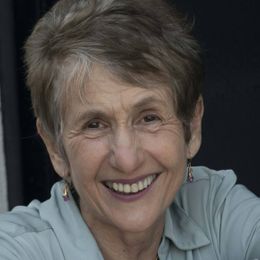 Francine Russo is the author of Love after 50 and They’re Your Parents, Too!  Armed with a PhD in English literature, she became a journalist focusing on psychology, relationships and social trends. And she’s made her mark. Having cut her teeth at the late lamented Village Voice, she’s gone on to write for virtually every publication from the Atlantic to The New York Times. She covered the Boomer beat at Time magazine for over a decade, and her cover stories have appeared on Parade and Scientific American and New York Magazine. She lives with her partner in New York. Read More
Advertisement