What was your passion before you had a mortgage, a big job, kids and countless other responsibilities? And how can you get back to it now? Those are questions taken up by author and former New York Times reporter Ari Goldman in his new book, The Late Starters Orchestra.

Goldman’s story of returning to the cello after 25 years shows the importance of determination, mentoring, collaboration and practice, practice, practice. He is not a good player, he says — and his teenage daughter confirms that fact for him. But through his connections with other musicians, including his son, he gets better, even good.

This excerpt from The Late Starters Orchestra, shows Goldman stretching from one community orchestra that accepts anyone, to one he has to try out for. (Printed with permission from the publisher.)

My initial success with Late Starters Orchestra (LSO) emboldened me to stretch more and explore the Downtown Symphony, an ama­teur adult orchestra that has been in existence for 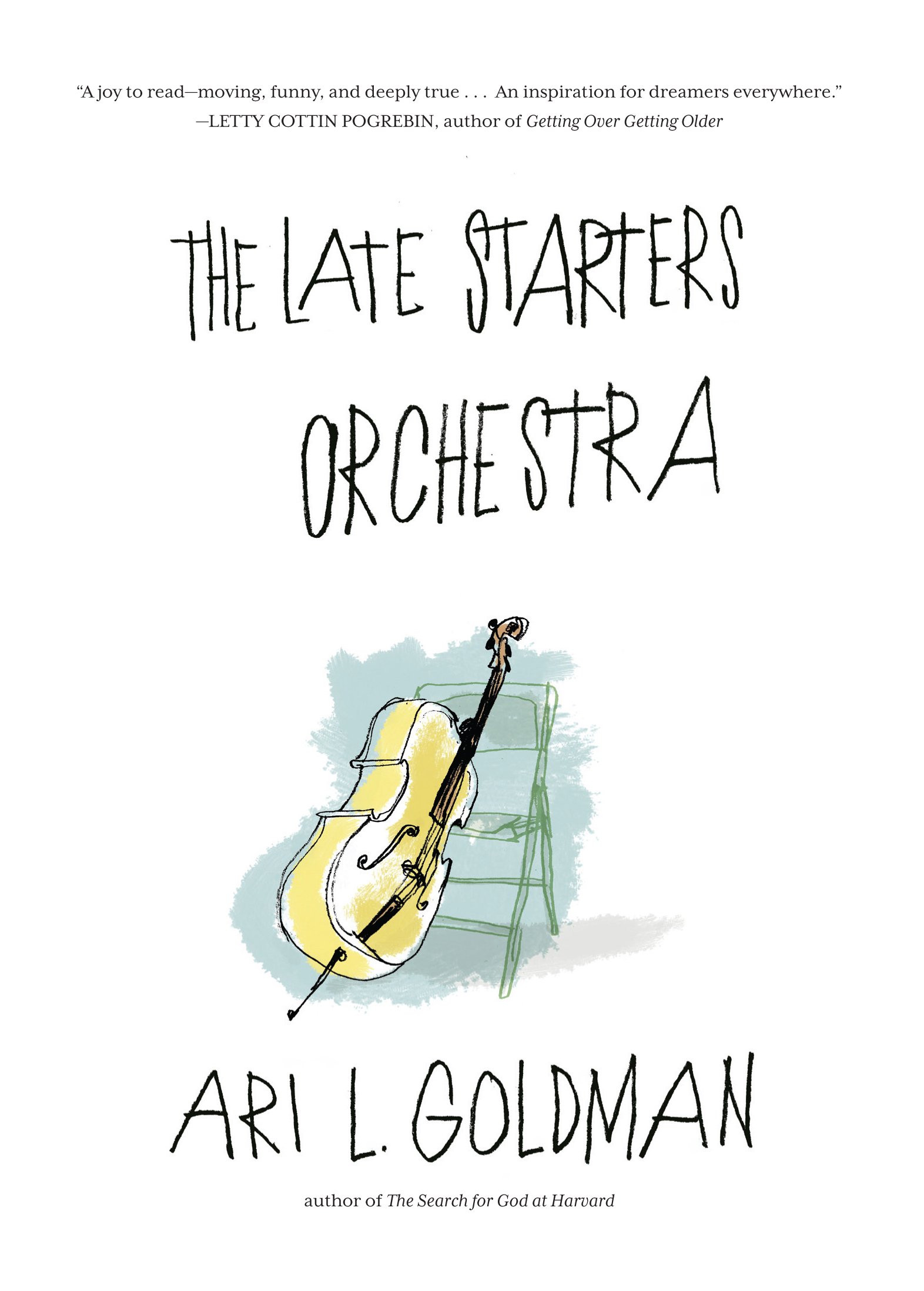 more than 25 years at the Borough of Manhattan Community College in Lower Manhattan. The orchestra gives four public concerts every year including an annual Messiah sing-in at Christmastime. After I heard about the Downtown Symphony from Eve and Mary at my first Late Starters rehearsal, I checked out its website. There, I saw these dreaded words, which Mary had already warned me about: “Admission to the orchestra is by audition.”

I read on. In this audition, I would need to “play scales,” “sight-read” and “play two contrasting pieces” of music. I knew numerous scales and I had at least two simple pieces in my repertoire (though I wasn’t sure if they were contrasting enough), but sight-reading? For me, that’s like seeing a mathematical formula and recognizing all the numbers and symbols without having a clue of how to solve it. It looks familiar but what does it all mean? I knew I wasn’t ready for this audition, but Mary’s words kept ringing in my ears: “You may not live long enough to be ‘good enough.’”

I screwed up my courage and called Doug Anderson, the Downtown Symphony conductor, and scheduled an audition for late one winter night after work. Doug was warm and friendly when I met him in his crowded office at the college, where he is a professor of music. I told him that I had been playing on and off for a long, long time but that I still considered myself something of a begin­ner. “Most everyone who comes is like you,” Doug said. He told me that only a handful of the 50 players in the orchestra were music students or faculty members; most were amateur musicians who ranged in age from 18 to 80. He cleared away some books and papers in his office and I set out my cello. I told him I was a little rusty and a little nervous about the audition. He sought to calm me down. “Listen, Ari. We are a learning orchestra, not a terrorist organization . . . like some other orchestras. We’re here to have fun.”

I laughed nervously and threw myself into my music. I made it through the scales OK and the two short pieces that I had prepared. I thought I noted a trace of a sym­pathetic smile on his face, but then I was playing pieces from my son’s Suzuki cello book. “Nice,” he said slowly, which was a sure sign that he wasn’t convinced. Doug then handed me a page of sheet music by the French composer Georges Bizet. I knew that Bizet wrote the opera Carmen, but this was not a trivia test. It was an audition and I was supposed to play — by sight — music that I had never seen or heard before.

I put the Bizet on my music stand, studied it for a few seconds, smiled wanly and said, “Honestly, I don’t know where to begin.”

What’s the key signature? I suddenly heard Mr. J asking. That’s where our understanding of the music begins. The key signature consists of one or more notes arranged on the five staff lines at the very top of a piece of sheet music. Reading music, I heard Mr. J say, is like reading English or German or Chinese or any other language. The key signa­ture, in effect, tells you what language you are in. Think of it this way: The key signature tells you the language, the notes are words, the measures are sentences, the lines are phrases, and the cadences are periods. Now read!

I took a closer look at the Bizet. I saw a C# and an F#. I knew that meant that our “language” was the key of D. Then, haltingly, I played the first note, and the second and the third and soon a musical story began to emerge. I thought I was doing well and eagerly looked to Doug for an assessment.

MorePassions: Why I Love the Ukulele

“Let me be honest with you,” Doug began. “I’d love to have you in the orchestra. You seem dedicated and interested in learning. You’ve got the right attitude. But this might be frustrating for you. At the beginning you’ll be playing about 10 percent of the music I hand out. By the time the concert comes, you’ll probably be up to 50 percent. Next year, even more. But it’s going to be tough at first. If you don’t think it will be too frustrating for you, you’re in.”

“I’m in?” I said, almost disbelieving what I had just heard. I actually passed the audition? Is that possible? Whoopeee! I tried to remain cool. “OK,” I said with a smile. “I’ll give it a shot.”

A week later, I showed up for my first rehearsal. I had none of the jitters that accompanied my first Late Starters rehearsal. I auditioned. I was accepted. I was ready. The Downtown Symphony met in a proper soundproofed music room at the community college, not at all like the makeshift rehearsal space of the LSO. And unlike LSO, which was all strings, this orchestra included oboes, clari­nets, flutes and horns. It even had a percussion section, complete with various drums, cymbals and a gong. There were about 50 of us in all, including my friends Eve and Mary from LSO. I had to pinch myself. I felt like Pin­occhio in Geppetto’s toy shop. I was a real boy in a real orchestra!

The rehearsal began. We were playing passages from Tchaikovsky’s 1812 Overture, a piece I’ve always loved. What a full, rich sound! It was thrilling to be sitting in the middle of all that thunder and excitement. I surprised myself by being able to keep up with more than 10 percent of the score. I was with them 20 or even 30 percent of the time, but then I already knew the music, just from hear­ing it so many times. Knowing the melodies always makes them easier to play.

During the break I spoke to some of the other musi­cians and was gratified to learn that I was not the only one who was lost. “Do you figure it out by the time of the con­cert?” I asked a young man who played the double bass.

“Isn’t there a lot of pressure on you to get it right?”

“No,” another musician, a violinist, chimed in. “At the concert, Doug brings in some pros who lead the way.”

“You mean he brings in ringers?”

“Who are they substituting for?”

It sounded like a good thing. You bring in some real good players and that brings up everyone’s game. I asked if any of the “ringers” were at the rehearsal that night.

“They never come to rehearsals,” my new friend, the double bassist, told me. “They’re pros. They just show up the night of the concert. Now don’t worry. We have backup.”

After the break, I went back to playing with greater confidence. Performing with a safety net sounded perfect.

1. Never pack away your instrument. Leave it out so you can get your hands on it when the spirit moves you. Play every day.

2. It’s impossible to keep up with kids. Instead, find like-minded adults who are just a tad better than you are to play with.

3. Consider every note a song.

6. Learn a favorite song and play it to death. That way, if someone hands you an instrument, you can play at least a few bars of something.

7. Go to concerts. Listen to your devices. Surround yourself with the music you aspire to play.

8. Don’t spend a lot of money on your instrument. Spend it on a teacher with an abundance of patience and a sense of humor.

9. Record yourself playing. Don’t listen to it, even once, for at least a year. Revel in how far you’ve come when you finally do listen to it.

10. When you play Mozart or Chopin or the Beatles or Elton John, remember that they played this, too. You are connected.

11. Have fun! You will never be a soloist at Carnegie Hall. Accept that and play because you love it!

Ed Attanasio, whose work began as stroke therapy, has found a new audience

How to Adjust to the Ongoing Stress of the Pandemic

As the crisis has become chronic, there are ways to try to adapt

Life Lessons From a Favorite Teacher

By sharing the Anne Frank story and his war experience, he made an impact

How the Pandemic Has Increased Suicidal Thoughts

What to do to help yourself or a loved one

From Nana to PopPop: How Grandparents Get Their Names

Heritage, pronunciation and even location can play a role

The Scramble to Find Poll Workers

COVID-19 is making many reconsider the job this Election Day

How to Spend Less in Retirement: Fewer Lattes or The Big Cut?