Looking Ahead to Life in Your Nineties and Beyond

Both of my grandparents lived into their 90s, and I was fortunate enough to be able to spend time with them during that stage of their lives. What struck me most about those years was how active and engaged they were as they grew older – and as it turns out, my grandparents weren't outliers in this regard. Thanks to changes in lifestyle and advances in medicine, more people than ever before are expected to live exceptionally long, rich lives.

There were 1.9 million Americans aged 90 and over in 2010, and that number is only expected to rise. In fact, the U.S. Census Bureau predicted that this population will more than quadruple by 2050, comprising 10% of people in the 65-and-older age bracket. Put another way: One in three of today's 65-year-olds will live into their 90s. That's great news!

With so many people living longer, we started to think about how today's baby boomers are anticipating their lifestyle 30 years in the future, when they'll be nonagenarians or centenarians. To find out, AgeUp surveyed baby boomers in February 2020 about their preferences and pastimes for their 90s and beyond. We prompted respondents to choose three things that they were most looking forward to about their 90s, and the responses weren't unlike what my own grandparents experienced in their later years. Nearly two-thirds (61%) said they were most looking forward to relaxing, followed by spending more time with family and friends (56%) and spending more time on hobbies (37%).

Independence emerged as a key theme for boomers anticipating life in their 90s. Around one in three (32%) were looking forward to travel, and nearly three-quarters of respondents (73%) said their preferred living arrangement would be in their own home. Another third of respondents (29%) noted that they were looking forward to medical advancements, which will presumably bring about a better quality of life.

We then asked survey respondents to imagine that they knew for sure they would live to age 100. What would they do differently? Taking care of their minds and bodies were popular answers, with "exercise more" (52%) and "improve my diet" (46%) among the top of the list. People also saw value in cultivating personal connections, saying that strengthening family relationships (28%) and maintaining friendships (27%) were important.

But the top answer had to do with money. More than half of survey respondents (53%) said they'd save more if they knew they would live to 100. This lack of confidence around finances during their later years also emerged when we asked boomers about whether they'd be able to afford the lifestyle that they desire in their 90s. More than one in four (29%) said they were "somewhat confident," while another quarter (25%) said they were "not at all confident." Further, respondents expressed that they are worried about running out of money in their later years, with two-thirds (66%) citing this as a concern.

We built AgeUp to help baby boomers achieve the freedom and financial independence that they desire in their 90s and beyond. The reality is that older adults often outlive their savings, forcing them to turn to family members or friends for support. With AgeUp, small monthly payments today "stack" over time to create a guaranteed income stream once you reach age 91 or beyond. You can choose how much to contribute each month, and payments can be paused or adjusted at any time.

For example, a 60-year-old woman who contributes $50 in monthly payments to AgeUp, waives the return of premium and selects age 95 as her payout age would receive $2,056 per month once she turns 95. If she chooses to have her premiums returned to a beneficiary in the event that she does not reach the payout age, she'd receive $1,144 in monthly payouts.

When purchasers select a later payout age, that's where AgeUp really shines. Let's say the same 60-year-old woman chooses age 100 as her payout age instead of 95. In that scenario, she'd receive $9,706 per month once she turns 100 if she forgoes her return of premiums, or $4,367 per month if her premiums are returned to a beneficiary if she does not reach the payout age. While these rates are illustrative and will vary based on each situation and options chosen, the value proposition remains the same.

We know how important it is to live the life that you've desired and to enjoy the things that matter most to you in the years to come. AgeUp was designed to provide peace of mind for those who are concerned about outliving their resources. It's a small decision today that very well might have a big impact down the road.

AgeUp is a Deferred Income Annuity (ICC19DTCDIA) issued by Massachusetts Mutual Life Insurance Company (MassMutual), Springfield, MA 01111 and offered exclusively through Haven Life Insurance Agency, LLC. Contract and rider form numbers and features may vary by state and may not be available in all states. Our Agency license number in Arkansas is 100139527.

Rates listed are accurate as of 11/30/2020. Payout rates cited in this post assume the AgeUp's current purchase rates will not change for future purchase payments. It is likely that they will change, and actual payouts will be higher or lower than shown. 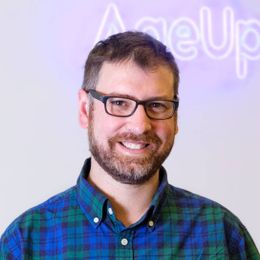 Blair Baldwin Founder and General Manager of AgeUp, part of Haven Life Insurance Agency
Blair Baldwin is the founder and general manager of AgeUp, a first-of-its-kind financial product that fundamentally reimagines how annuities can both materially help the lives of middle class Americans and solve a looming financial crisis facing our country: how to close the gap between life expectancy and retirement savings. Blair and his team developed AgeUp as a new business unit inside Haven Life, MassMutual’s in-house startup. Read More

AgeUp provides guaranteed, supplemental income to help fill in the financial gaps that come with an exceptionally long lifetime. Each small monthly payment to AgeUp "stacks" over time, creating a secure income stream that begins at age 91 - or beyond - and lasts for life. Contributions to AgeUp are shielded from market swings and can be adjusted or paused at any time. Once the selected age is reached, payouts can be used for any expense, with no restrictions or claims to file. AgeUp is a deferred income annuity that is issued and backed by MassMutual and sold by Haven Life Insurance Agency, a MassMutual-owned innovation hub.