By learning how to recreate family favorites for my daughter who has celiac disease, my mom showed me love that I wasn't expecting

My husband pulled our Subaru in front of my parents' condo building at the Jersey shore, where my dad greeted us as we unloaded our bags. Helping my then five-year-old daughter out of her car seat, Dad told her, "Wait till you see what Mommom made you! She's been cooking for two days."

Growing up in the Philadelphia suburbs, it was family tradition to go "down the shore" every summer. My parents would take my siblings and me to Atlantic City and Margate for month-long stays in rented houses or weekends at The Deauville, a long-since demolished Boardwalk hotel.

They eventually bought a small condo. After my siblings settled in other parts of the country, I continued to spend summer weekends with my parents, joined by my husband and, later, our daughter.

I was well cared for, with my own room, clean clothes, hot meals, packed lunches — but my emotional nurturing came primarily from my dad.

Memories of the shore fill my senses. The sound of seagulls laughing. The smells of Coppertone on warm skin and greasy French fries wafting from restaurant vents. The texture of ice cream, gritty with fine sand, melting between two sticky chocolate sandwich wafers and the thrill of a treat from the ice cream man who schlepped a giant cooler packed with dry ice up and down the beach on his back.

I wanted my daughter to grow up with her own connection to the shore, linked with memories of mini-golf, painting seashells and digging in the sand with her Mommom and Poppop.

A Diagnosis of Celiac Disease

We spent the summer before my daughter's second birthday at the hospital, not the beach. She'd been losing weight and experiencing stomach problems for months. A sweat test revealed she had cystic fibrosis (CF), a genetic disease that affects the lungs and digestive system.

Two months after her diagnosis and hospital discharge, she was inexplicably ill once again, her same gastrointestinal symptoms having returned. Something else was going on. We returned to the hospital and, after a month-long stay, received a second diagnosis: celiac disease.

My short-lived relief in having an answer was immediately followed by the paralyzing realization that I had no idea how to feed my daughter.

This was 1998. I had never heard of celiac, and gluten-free (GF) options were mostly limited to brick-like loaves of bread on the shelves of natural food stores or packaged foods in mail order catalogs. One store gave me a glimmer of hope: Fresh Fields.

The night of my daughter's diagnosis, I drove straight from the hospital to Fresh Fields, an early incarnation of Whole Foods that had recently opened in my area. Armed with a tiny notebook and pen, I wandered the aisles, zombie-like, taking down the names of cereal brands, pastas, crackers, brownie and pancake mixes labeled gluten-free.

Choices were limited, but they existed. I'd have to go old-school, trading the convenience of prepared foods for the safety of home-cooked meals. Just like my mom.

I grew up in the 70s, when my mom cooked dinner every night for our family of six. She was a stay-at-home mom prone to frequent bursts of anger. I was well cared for, with my own room, clean clothes, hot meals, packed lunches — but my emotional nurturing came primarily from my dad. It wasn't until I turned 18 that I got to know her softer side. The years between college and moving out to get married at 23 were our best together at home.

After my daughter was born, my mom emerged as the loving maternal figure I hungered for throughout my childhood. Praise replaced criticism; sarcasm became silliness. Her adoration was directed at my child, but I felt the radiant warmth.

Hearing their giggles as my mother and daughter played hide-and-seek in the same living room that was off-limits when I was a kid, I felt something shift. My memories took on a warmer hue as our family dynamic continued to evolve. Then my mom surprised me once more.

Making Favorite Meals for My Daughter

When I was young, one of my favorite meals was my mom's cornflake chicken. She'd coat boneless, skinless chicken breasts in French dressing, dredge them in crushed cornflakes, and bake them to crispy, tangy-sweet perfection.

Decades later she began doubling her recipe and using the leftovers for chicken salad, chopping the cold pieces of chicken in a food processor, seasoning with salt, pepper and onion powder, and adding mayonnaise to taste. It was rich and creamy, perfect by itself or in a sandwich with fresh sliced Jersey tomatoes. She'd bake my grandmother's noodle pudding (kugel) as a side dish and it quickly became a staple of family get-togethers.

It was my mother's idea to recreate these recipes so my daughter could safely eat them.

"I want to make my chicken salad and noodle pudding gluten-free and need your help going over the ingredients," she said.

It was my mother's idea to recreate these recipes so my daughter could safely eat them.

Smart phones hadn't been invented yet and websites were still spotty when it came to nutritional information. I'd been compiling a database of gluten-free foods in a loose-leaf notebook by calling companies, consulting celiac support groups, and reading labels. I consulted my binder and my mom dutifully took down notes, listing GF brands of salad dressings, noodles ("Use rice-based linguini in place of egg noodles," I told her), seasonings and more.

She visited multiple supermarkets and health food stores to gather ingredients, and cooked for two days straight, adjusting cooking times for the noodles and comparing flavors. My dad happily ate the failures until she perfected her recipes, surpassing the originals.

The next weekend, my daughter didn't notice the foods she was excluded from eating as we strolled on the Boardwalk past stands selling slices of pizza and cheesesteaks fresh from the grill. She had her own feast waiting at the condo, handmade by her Mommom. It became our go-to meal at the shore for the next 15 years, a tradition made more precious when my mother moved into a memory care facility last year.

My mom's act of love toward my daughter was also a gift to me. It was a defining gesture that let me know I didn't have to navigate her celiac disease alone. The next decade would reveal myriad challenges inherent in a child's food intolerance — birthday parties, playdates, day camp, classroom treats, restaurants, travel — before awareness, technology and cultural shifts gradually expanded our options.

At a time when ordering gluten-free in a restaurant usually resulted in a naked chicken breast and plain steamed vegetables, my mother's willingness to go that extra mile to cook real food for my daughter was a lifeline to this young mom. 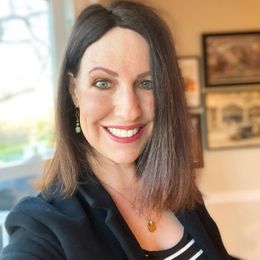 Abby Alten Schwartz is a Philadelphia writer and health care communications consultant whose work has appeared in The Washington Post, The New York Times, WIRED, Scary Mommy, The Seattle Times and elsewhere. She is currently writing a memoir about her journey from hypervigilance to trust. Find her on Twitter @abbys480 or visit abbyaltenschwartz.com. Read More
Advertisement