In Pennsylvania, Nursing Homes May Soon Have to Provide More Direct Care

Proponents say increasing the amount of time a paid caregiver spends with a resident will improve patient care. Opponents say, given the staffing shortages, the task is nearly impossible

There's one thing both sides agree on as Pennsylvania considers a proposed regulation that would increase the current minimum standard of care per nursing home patient from 2.7 hours over a 24-hour period to 4.1 hours:

And that's about it.

Direct-care hours are defined in Pennsylvania as the amount of hands-on care — for example, medicating, feeding, bathing or toileting — provided by one of three types of employees: a registered or licensed nurse or a nursing assistant.

"If a 4.1 staffing regulation, effectively the highest in the country, goes into effect … then we'll have a real problem."

Supporters, including Democratic Pennsylvania Governor Tom Wolf's administration, The National Consumer Voice (a long-term care advocacy group) and SEIU Healthcare (the labor union for health care workers) say the change will be difficult, but will improve patient care and could create thousands of jobs.

Those opposed to the change, which includes the Pennsylvania Health Care Association (PHCA), which represents more than 400 long-term care providers and LeadingAge PA, which advocates for nonprofit nursing homes, say the change is beyond challenging: It's impossible

"Due to work force shortages, providers are already being forced to limit or reject new admissions," said Zach Shamberg, president and CEO of PHCA, which has branded the proposal "Unfounded, Unattainable, Unfunded."

He added that, "If a 4.1 staffing regulation, effectively the highest in the country, goes into effect … then we'll have a real problem."

Pennsylvania would not be the first state to impose staffing requirements. According to one study, California law requires all nursing homes to provide at least 3.5 nursing hours per resident day.

Pennsylvania has almost 700 nursing homes known as skilled nursing facilities and which receive federal funding; they're distinct from assisted living and personal-care homes. More than 100 of those nursing homes already provide at least 4.1 hours, and more than 400 provide at least three hours, according to the state Health Department.

But Georgia Goodman, LeadingAge PA's director of government affairs, said many of the facilities already meeting the 4.1 threshold have few or no Medicaid patients. Medicaid reimbursements have not been increased in seven years.

"The Medicaid component is a crucial piece of the puzzle," she said. "You can't increase wages or add staff if there's no (Medicaid) reimbursement increase change."

Pennsylvania officials estimate it will cost $366 million per year to guarantee all skilled nursing home residents receive the minimum of 4.1 hours of care each day. Collett said elected officials know that the jump from 2.7 hours to 4.1 hours will take time, and they are willing to listen to and satisfy industry needs.

"We're going to get there, so let me help you get there," Collett said. "I'm not going to entertain a conversation where we talk about not getting there at all. … It's a matter of working with stakeholders who say they are doing what they can to get there and not have barriers."

Industry leaders question that $366 million figure and note that Pennsylvania's Independent Regulatory Review Commission (IRRC) last month concluded that it was unable to determine if the proposed increase in care hours was "in the public interest."

IRRC also writes that the Pennsylvania Department of Health "should provide more detailed and expanded information related to economic provisions."

"They need to provide IRRC with thorough data to convey the true impact on this regulation," PHCA's Shamberg said.

Steve Tack, CEO of Quality Life Services, a third-generation-run family business with 10 facilities in western Pennsylvania, says the national labor shortage is forcing employers to raise wages to attract quality staff and that it's unclear how high those numbers will grow.

"I have open positions right now and I can't find people."

"A 4.1 hour mandate would mean I'd have to discharge twenty-five percent of my patients, but I'm not sure where I'd discharge them to," Tack said.

The pandemic has shown his industry's vulnerability. Tack's organization received a one-time disbursement of $3 million in pandemic assistance money which allowed the implementation of wage increases across the board. But what happens next?

"The challenge is once we implemented them, that's a cost this year, next year and every year going forward," Tack said.

Nursing home regulation is a hot topic in Washington D.C., too. On November 19, the House passed a bill that would require nursing homes to have a registered nurse on staff 24 hours a day and to take part in a staffing study so federal officials can implement a federal minimum staffing standard.

The addition of these provisions, part of the Biden administration's Build Back Better Act, were sparked by the ways many nursing homes responded to the COVID-19 pandemic. The virus has killed more than 186,000 nursing home patients and staff members the last 18 months, according to Lori Smetanka, executive director of The Consumer Voice for Quality Long Term Care.

The House bill, which will now move on to the Senate, includes $4 billion for staff recruitment, training and retention.

An even greater issue is finding staff, Tack said. "I have open positions right now and I can't find people," he added.

To bring more people into the field, the industry and elected leaders must find creative ways to make the field more accessible, something it's done before, Goodman said, adding that, "allowing flexible training and schooling online or supplementing trade curriculums to offer additional visibility — there are lots of options we hope the state considers."

"We need more people to get through our day and do our work. The 4.1 is all about staffing the facility so residents get the care they deserve."

When the pandemic began, Pennsylvania said aspiring nurse aides needed only to take an eight-hour online training and examination to be qualified for temporary positions. About 3,000 people underwent the training and hundreds found jobs in health care.

In September, Collett and other Pennsylvania officials announced that $6.5 million in American Rescue Plan dollars would go towards programs that will encourage people to enter or remain in nursing.

Keshia Williams, a Certified Nurse Aide from Scranton, Pa., wrote about her nursing home experience in a recent op-ed (republished below).

She said many co-workers left the industry because of pandemic burnout. That means those who remain, like her, are often asked to do double shifts or manage the care of up to 20 patients.

"We need more people to get through our day and do our work. The 4.1 is all about staffing the facility so residents get the care they deserve," said Williams, who is also a member of SEIU Healthcare's executive board. "The 4.1 allows us to do our jobs efficiently and with care."

She predicts her former colleagues will return to health care if elected officials work with industry leaders on a fair wage and benefit system.

When there is enough staff to take care of physical and emotional needs, without being rushed, without feeling like it's an assembly line, it makes all the difference for quality of life

As a nursing home certified nursing assistant, I have witnessed, first-hand, the devastation from COVID-19, and also the failures of our long term system that brought us here.

Caregivers have feared for our health, isolated from our families. We have worked double shifts to cover the schedule to make sure our residents had someone to bathe and feed them. And we have sat with residents as they passed when their own families had to be kept away.

But COVID-19 was not the beginning of this crisis. For decades we watched as companies cut staffing, forcing caregivers to do more and more with less and less.

The work has become overwhelming, because you know you can't give your residents the care they need and deserve. Showers and bathing are missed. Meals are rushed. Every night you go home wondering if Mr. Smith got to watch his favorite program, or Mrs. Jones had her fingernails trimmed.

This opinion piece first appeared in the Pennsylvania Capital-Star.

You can read her entire op-ed here. 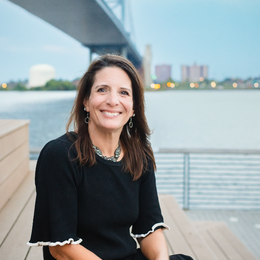 Natalie Pompilio is a freelance writer based in Philadelphia. She and her photographer sister recently collaborated on This Used To Be Philadelphia, published by Reedy Press in 2020. Read More
Advertisement