Service Dogs Offer Help and Friendship to People with Alzheimer's

From medication reminders to easing anxiety, dementia service dogs aren't commonplace, but they have a positive impact on their owners

An incident on his bike was the catalyst for John Wood getting a service dog. Diagnosed with early-onset Alzheimer's at 46, Wood, a longtime teacher, artist and avid biker, was on a ride back from hearing his wife sing at church when he got lost. It was late in the day in the Detroit suburbs, and he was suddenly disoriented.

But when he asked people sitting on their porches for help, they balked. Wood is 6'3 and 240 pounds. "I was this giant scary guy asking people for a weird request," he said.

Eventually another cyclist helped him to a police station. "I went home in the back of a police car," he said. "It was an awful experience of people being mean and misunderstanding."

After hearing this story, Wood's doctor announced, "John, you need a constant companion who's really cute: a service dog. If you have a dog with you that's friendly, people will see the dog."

That's exactly what happened when Wood was paired up with Ruby, a long-haired chihuahua.

"The more time we spend together, the more we get to know each other, and if I need help, she barks."

"One of Ruby's things is she's always nice, she's gorgeous ... people stop their car and ask what kind of dog she is," he said of Ruby, who's now been with Wood and his family for seven years.

She also performs important tasks. Wood has a fainting disorder, which can come on suddenly. Ruby helps with that.

"She'd notice when I was about to faint and she'd bark," he said. "The more time we spend together, the more we get to know each other, and if I need help, she barks." People come over to assist where in the past they ignored him.

Mark and Brenda Roberts of Alma, Michigan, had always been dog lovers. But it was a few years after Mark was diagnosed with vascular dementia, in his early sixties, that the couple decided to buy and train a service dog.

Mark, now 70, knew one thing. No Labradors for him. He wanted a dog that would sit in his lap, a ball of fur he could cuddle. The couple picked out a bichon frise puppy, named her Sophie, and a new relationship began.

The couple knew a local dog trainer and asked her to help them train Sophie. Brenda says they opted for this route, rather than buying a fully trained service dog, because they wanted to take part in the training themselves, and to know the dog from puppyhood.

They also wanted to save money. Buying a fully trained service dog can cost tens of thousands of dollars.

The Americans with Disabilities Act defines a service dog as one who performs tasks for a person with a disability, tasks that directly help with that disability.

Sophie has been trained to track Mark by his scent, should he ever get lost, but her main daily task is to fetch his medication from a cupboard in the bathroom. Every evening at 8:30 p.m., the couple's Alexa device announces, "Sophie, go get it" and Sophie shoots off to the bathroom to retrieve Mark's meds.

She also wears a GPS, which, since Mark and Sophie are never apart, tells Brenda, who still works full time, where Mark is. He continues to drive on local roads and can often be spotted at McDonald's, at church, or at the dog trainer's.

Brenda and Mark both say there are less tangible benefits as well. For Brenda, it's been the joy of training Sophie, and loving her, together.

"It was like having a child, a common project to work on," she said. "We had bath night, we groomed her, we trained her … it gave us a non-dementia activity to do together."

Mark concurs: "It brings the life back to Brenda and I," he said. "It gives us something to socialize about with other people. We meet a lot of interesting people and dogs."

In addition, though, Mark says that having Sophie with him all day not only alleviates his anxiety and provides companionship, but she can help him keep his thoughts straight. He has always worked with his hands, but that's become harder as his dementia has progressed.

"If I'm going to make something out of wood, I will talk to her and give her the measurements and stuff, and as I've wrote 'em down it helps me not to write the wrong measurements down," he explains. "[By addressing Sophie] it doesn't leave my mind right away."

'An Uncommon and New Type of Service Dog'

According to Chris Diefanthaler, executive director of Assistance Dogs International, "Service dogs for dementia are an uncommon and new type of service dog." Of all the members of her organization worldwide, she says only a few report that they're training this type of service dog.

In the U.S. in particular, it's an area not many people know about.

Jennifer Lutes is associate director at 4 Paws for Ability in Xenia, Ohio. She says dementia service dogs is their newest area of training.

"We settled on the need by circumstance. One of our volunteers approached us looking to adopt a dog for his wife with dementia." The organization has made three placements in the last couple of years.

Lutes says the true cost of training a service dog is between $40,000 and $60,000. Her organization, funded largely by donations, charges the client $20,000. She says many families raise money for their dog through crowdfunding campaigns.

Any service dog for a person with dementia must be able to receive commands from a live-in caregiver, as well as the person living with dementia.

It takes about a year and a half of training for a dog to be ready for placement, and Lutes says their journey starts when they're tiny.

"Dogs go through a health and behavior program to even join the [training] program ... puppies go home with a volunteer trainer, and they learn socialization and manners. They're given that foundation for advanced training," she explains.

Lutes says she has occasionally been approached by an adult child inquiring about the option of a dog to help a parent who lives alone. Lutes tells them that any service dog for a person with dementia must be able to receive commands from a live-in caregiver, as well as the person living with dementia. A dog cannot replace a human caregiver.

She offers another caveat for anyone considering a service dog: "Dogs need care, time and energy," she said. "If you're too stressed for those types of things, a dog might not be right for you. A dog also needs to practice their skills. Sometimes people don't realize that. They see a dog in public and it's polite in public, and they don't realize what it took to get to that point."

A Bridge to the Outside World

But Lutes agrees with Brenda Roberts that a service dog can be a huge boon, and not just to the person living with dementia.

"From my perspective having Sophie do things for Mark means it's one less thing I have to do as a care partner, and from his perspective he's independent," Brenda said, adding that her husband is also more social than he would be otherwise.

John Wood says his chihuahua Ruby has also provided a bridge between him and the outside world. Her presence has attracted friendly comments and made him more confident when he's out and about.

"You hear Alzheimer's and people think you're in a chair drooling," he said. "But there's a way to share who we are. We don't have to be hidden and having service animals and that partnership makes it possible to take part in regular activities that wouldn't be possible for me otherwise."

When Wood bikes these days, Ruby is strapped to his chest. 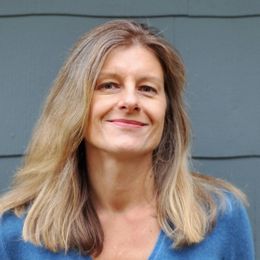