Learning Rummikub at the Pool

A few unexpected friends buoyed my family when I became a newly single mother. Benefits of these intergenerational interactions remain.

"Do you think our friends will be there to play?" asked my twelve-year-old son as we readied ourselves to go to the pool.

I knew when he said "friends" he meant a group of older neighbors. These men and women who sat at an umbrellaed picnic table chatted up all the pool goers and taught my boys and I to play Rummikub the summer we moved into our townhouse after the divorce. Our friends ranged in age from 60 to 80. Doris and Stan, Sue and Joe, and George, ("the bachelor") held court while others came and went depending on the day and the weather.

I knew when he said "friends" he meant a group of older neighbors.

Doris, a tiny woman with tan skin, a bright bathing suit, and neatly coiffed white hair, brought along her red and white zippered case. As she reviewed the rules of the tile game, her husband, Stan an introvert, sat beside her listening to the Phillies on his radio.

We learned about each member of the game gang through their personality of play. Doris delighted us with her feisty, competitive spirit and devious cackle. George kept us chuckling: "I remember when I was fit and good-looking in my swim trunks like you two guys." Sue and Joe offered equal parts snacks and advice as we pondered our next moves.

We had never heard of the Rummikub before that summer, although we had played the card game, 500 Rummy. Ephraim Hertzano, a Romanian-born Jew who emigrated to Israel in the 1940s, created Rummikub when the communist regime banned card games for being "decadent". After the family's move to Israel, they made the games at home and sold them to friends and later through door-to-door sales. Today, about 50 million games have sold globally.

The game, which uses many rules from rummy, is played with colorful plastic tiles. The strategic element appealed to my eldest son, a patient old soul, who quickly picked up the intricacies of play and worked to hold his own with the veteran players.

"Don't think we are going to let you win," they reminded my sons. "You have to do that on your own, fair and square."

My younger son, age 10, liked the raucous nature of the game and enjoyed a round along with the jovial banter from the group before he dashed off to play with the kids in the water. George called after him: "As a boy, I swam like a fish. I did so many cannon balls I nearly emptied the pool."

Our afternoons by the pool served as a refuge for me, a newly divorced mother learning to live without my partner of 15 years. When my work deadlines had been met and our friends entertained the kids, I relaxed and caught up on the neighborhood news or had a few moments of downtime in the sunshine.

One day as Rummikub wound down and the sun lowered in the sky, the conversation shifted to dinner. I mentioned I didn't feel like going home to make dinner.

"Let them have cereal tonight," Doris exclaimed. "Make it easy on yourself for once. They will survive."

As I struggled with the weight of solo parenting, Doris gave insight from her years of motherhood. Some nights I could make things easier for myself and not feel guilty. The children would be okay. I didn't have to take everything so seriously. Then she relayed, as she was wont to do, her nightly meal plan. "Tonight, we are going to have a nice egg salad with corn and some strawberries. Light and easy, refreshing."

Another time the couple shared that selling their house and buying the ground-level condo was the best decision they had made. Now they had more time to do fun things. I had downsized from a larger home and while I longed for my garden and the boys missed the grassy backyard, it was indeed more manageable. And that is just what we needed — more time together and less time doing house upkeep.

Even now years later, one of us will mention a quip of theirs — "You two need to work on your poker faces."

The gang slipped my sons a few of their life philosophies as well. When we greeted Doris with a "Hi, how are you?" she replied, "Great. I got up today." or "I'm still breathing!" and laughed. My sons giggled along with her.

One afternoon, George, usually the jokester, grew serious between games. "Make sure you do good in school, and never, ever try drugs or hang out with people who do," he said. His voice quavered and the boys, wide eyed, nodded. The other players murmured in agreement and play resumed.

Hanging with these more senior friends exposed them to different perspectives and provided a chorus of guiding voices. This made them feel welcome and valued in a transitional time when they were especially fragile.

We played Rummikub for several summers, but never as much as that first year. As the group grew older, they spent less time in the afternoon heat, and my sons got busier with sports activities. In autumn a few years later I heard Doris had fallen and needed surgery. Then a friend called to explain that while in rehab, Doris developed a DVT (Deep Vein Thrombosis) blood clot and died.

Memories of Our Summer Pool Days

I thought, Now I have to tell them. As they came in from school and put down their backpacks, I said: "I have some sad news. Doris is gone." My sons, lanky teens, huddled in and hugged me in our tiny kitchen. "She was a good friend," said one. "And so funny," said the other.

After some tears we did what we always do when we think of the game gang: we told stories about our summer pool days. Even now years later, one of us will mention a quip of theirs — "You two need to work on your poker faces." Or "Still vertical!" — and we smile. And on days when someone grumbles, "What's for dinner?" I say, "Cereal!" and chuckle. Everything is, indeed, alright.

Stan lived many years after Doris' passing and I inquired about him whenever I saw their daughter Karen around town. Recently he died, and Karen texted me to stop by as she readied her parents' condo for sale. We embraced in the entry of the nearly empty home.

"I wanted you and the boys to have this," she said, handing me the red and white zippered case, now worn and water stained. "I know how much they loved to play with Mom, and she would want them to have it."

I brought the case close to my chest sniffing back tears. "She was the best."

The game sits in a cabinet in our living room. Although we do not play it often, the memories and the lessons from our unexpected friends are always with us. 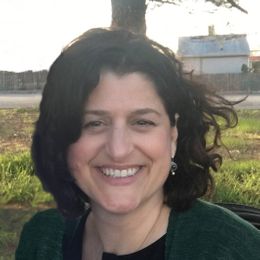 Lisa B. Samalonis is a writer and editor based in New Jersey. She writes about health, parenting, books, and personal finance. Read More
Advertisement